Rex's charity single for the nurses at Guy's comes after he got his first ever record deal, aged 81 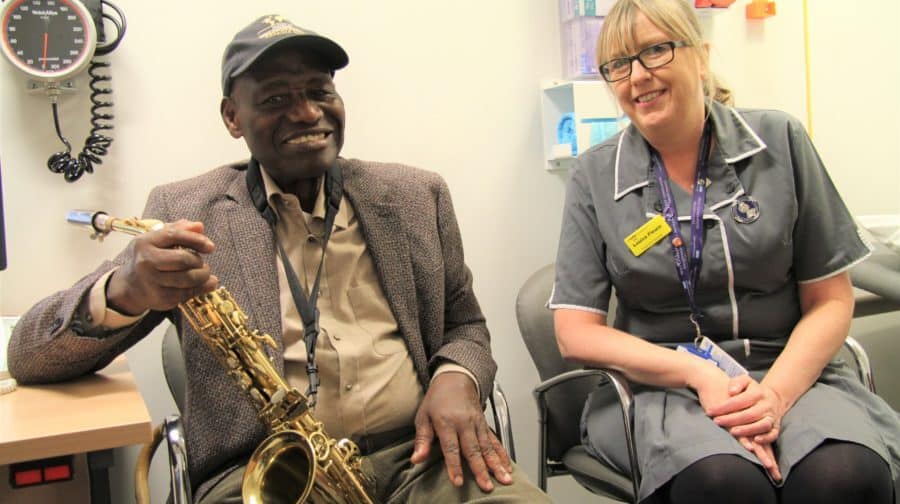 Rex, sitting with Louisa Fleure, a Guy's nurse he has previously written a song about

An 82-year-old pensioner being treated for cancer at Guy’s has written a charity single to thank nurses and doctors working during the coronavirus pandemic.

Afrobeats singer, Rex Martey, released the single on Tuesday, called ‘Thank You’, with all the proceeds going to the Guy’s and St Thomas’ charity.

In the song, Rex writes from the view of a patient with Covid, thanking all the people in the hospital who helped to treat him.

The musician is no stranger to being treated in hospital, having been a patient at Guy’s since 1983.

LISTEN TO THE SONG HERE:

His condition is currently stable, but he has dialysis three times a week. “I have been lucky enough to not catch coronavirus, but know how hard the staff have worked to make sure that vulnerable dialysis patients stay safe,” he said.

“This song is my way of repaying some of the gratitude I feel towards those who have cared for me.

“That’s everyone, from the doctors to the cleaners. I can’t say thank you to everyone in person, so I will say it in song.” Rex, who lives in Sydenham, worked on the single at home with his wife, who sang backing vocals.

The pair recorded it on a phone, before sending it to an engineer to be produced. The pensioner was featured in the News last year, after scoring a record deal aged 81.

His debut album, African Touring Holiday, was released after more than sixty years of performing in pubs and clubs.

It too included a single dedicated to doctors and nurses – the song ‘My Louisa’, dedicated to Louisa Fleure, a lead urology nurse at Guy’s.

You can listen to Rex’s latest track by searching ‘Rex Martey’ on Spotify.