A timeline of the Bermondsey bomb, with the best photos, videos and Tweets

Click here to view the best photos and online reaction to the 1000lb WW2 bomb found in Grange Walk. 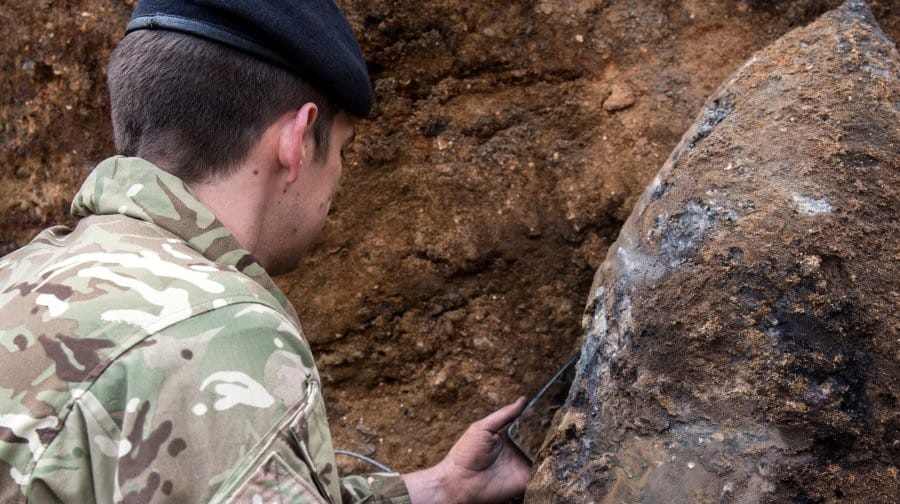 10:30 – Area within 400m of bomb cordoned off to traffic, within 200m is no-go zone. Police begin evacuating residents and workers.

11:05 – Tower Bridge closed in both directions. Traffic chaos across Southwark and other parts of London.

World War 2 affected so many people in so many different ways. Today it has delayed my Ocado delivery. #hardtimes http://t.co/sFwQ5O3Epw #fb

Army trucks near the scene.

One elderly lady says to me near the cordon ‘I was evacuated during the war I’m not doing it again.’ #Bermondsey

Evacuees at the relief centre at Seven Islands Leisure Centre.

The location of the bomb and the two exclusion zones.

17:00 – Residents of properties within no-go zone learn they will not be allowed to return to their homes for the night. 23:30 – All evacuees have a bed for the night, after Southwark Council re-home 80 people who were at relief centres in B&Bs, hostels and hotels. 00:00 TUESDAY – Throughout night police go door-to-door within 200m zone instructing residents to evacuate before 8am.

God bless three v.understanding and caring police officers who agreed to bring our dog from the evacuated flat to me #bermondsey #WWIIBomb — Ignaty Dyakov (@dignaty) March 23, 2015

It’s not everyday kids who were born 60 + yrs after a bomb was made, need to evacuate because of it. @boutchercofe @se1 @lb_southwark

06:00 – Fresh evacuations begin ahead of army operation to disarm the bomb.

09:00 – Last few residents evacuate – some refuse to leave. Grange School joins Boutcher, Kintore and Harris in closing down during the crisis.

09:00 WEDNESDAY – Bomb safely detonated at a quarry in Isle of Grain, Kent.

Just allowed back home. Nothing like not being allowed through your front door to appreciate how lucky you are to have one. #bermondseybomb — Samuel Adamson (@samuelmcadamson) March 24, 2015

Southwark NewsNewsA timeline of the Bermondsey bomb, with the best photos, videos and Tweets