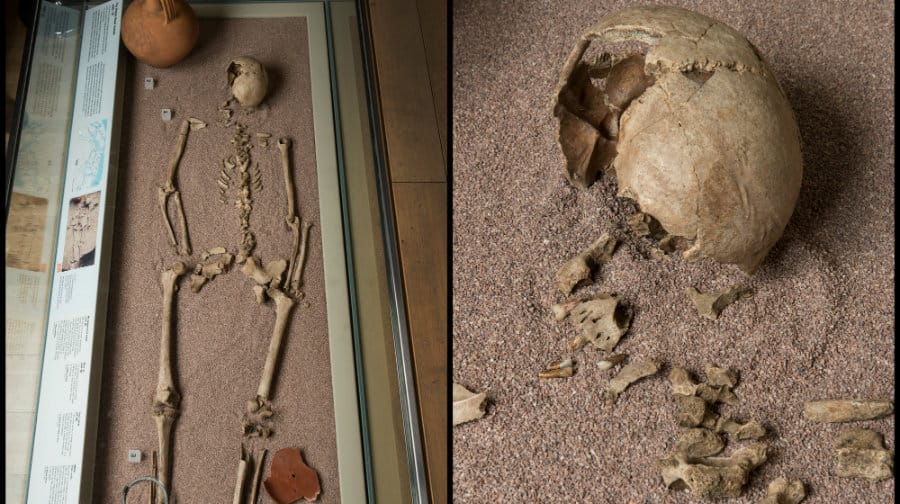 The remains of a gender-confused Roman skeleton discovered in Southwark has backed up a modern theory that there are not two sexes after all.

The grave of a young woman was uncovered in Harper Road in 1979, dating back to Roman London sometime between AD 50 and 70.

Ground-breaking DNA analysis of her skeleton by the Museum of London showed she physically appeared female, but had male chromosomes.

This corroborates a relatively new scientific theory that the idea of two sexes is ‘too simple’. The theory suggests everyone is a patchwork of genetically different cells, some of  which have a sex that doesn’t match the rest of the body, making biological sex more of a spectrum than first thought.

The woman, aged 26 to 35, was also buried in a unique way in Britain at that time – in a wooden coffin with a flagon (tankard) at her head and a bronze mirror and necklace at her feet  -suggesting she had a high status in society.

If the dates of her burial are correct she would have been a first generation Londoner, alive at the time of the Roman invasion of Britain and may have witnessed the Boudican Revolt and subsequent devastation of the city.

A skeleton of a teenage girl discovered in Lant Street in 2003 also featured in the study, which deduced everything from ancestry to diet and even eye colour.

The blue-eyed fourteen-year-old, who was around 5’ 3” tall, was buried in late Roman London during the 4th century, sometime between AD 300-400.

Analysis of trace elements in her teeth revealed she had been eating a diet of meat, fish, vegetables and cereals, but the bones in her forearms showed she also suffered from Rickets, a childhood disease caused by vitamin D deficiency.

She was buried with two glass vessels placed either side of her head and at her feet lay a wooden casket with bronze fittings, inlaid with bone panels. A folding knife was found at her right hip with an ivory handle in the shape of a leopard and a bronze key – suggesting she may have been the daughter or even the young wife of a soldier. Her maternal ancestry derived from southern-eastern Europe and west Eurasia but she was born in north Africa, proving that Londinium always was a hub of cultural diversity.

Senior Curator, Caroline McDonald, said: “We have always understood that Roman London was a culturally diverse place and now science is giving us certainty. People born in Londinium lived alongside people from across the Roman Empire exchanging ideas and cultures, much like the London we know today.”

There were four roman skeletons in total used for this piece of research, which will now all go on display at the Museum of London. The Written in Bone exhibition opens tomorrow and is free to visit.