The eagle has landed! Huge bird of prey ruffles feathers in Bermondsey

The trained bird had escaped from a nearby film set. 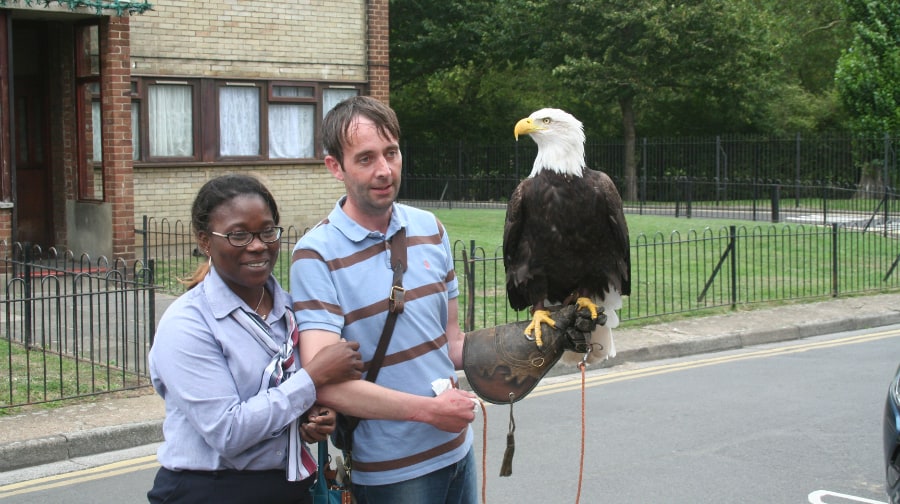 A surprised residents poses for a photo with the eagle and its handler.

A Bald Eagle ruffled a few feathers last week after escaping from a film set and landing on the roof of a Bermondsey council block – not something you see aviary day!

Eagle-eyed residents were shocked to see the majestic bird, which is indigenous to North America, resting atop Cornick House in Gataker Street for much of August 19.

Jane Daly, one of many residents to flock to the scene, said she “couldn’t believe it”.

She said: “I heard the crows going mad this morning and thought they were just annoyed with a seagull. When I came outside and looked up I couldn’t believe the size of it. There’s been a big crowd of people watching it all day. I’ve never seen anything like this here before.”

The eagle on the roof of Cornick House.

The trained eagle, which had a wing span of over six feet, is believed to have escaped from a film set in St George’s Field sometime during the morning. Luckily, residents were all a-Twitter and the buzz on social media alerted the handler to its location.

He arrived during the afternoon and managed to tempt the bird down off its perch with the help of a tasty treat. It soared into the adjacent Southwark Park where it was reunited with its relieved handler.

Residents, however, weren’t quite ready to say bye, bye birdie and gathered around the eagle to take selfies. The silver-screen celebrity was clearly a veteran of such press junkets and delighted its fans with a few minutes of its time.

Residents flocking around the bird.

Elizabeth Badru said: “I was just walking home and saw this! I saw the film crew driving around this morning, they must have been looking for the bird. I can’t believe this!”

Eventually, however, the talon-ed thespian was needed on set and, to the dismay of its adoring fans, it was time to wing its way back to work.

The bird is taken away.