The King of Nunhead

And the man behind the Elvis impersonator 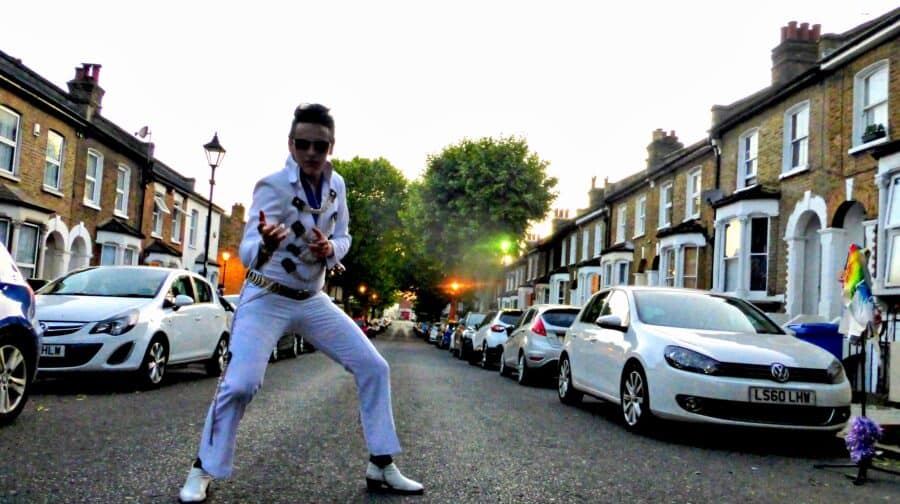 They had met several times before, often at open mic nights at Skehans pub on Kitto Road, but this time felt different – Michael was taken aback by the impressive crowd 20-year-old Aaron Arthur had attracted.

This chance encounter, and the social restrictions that would be enforced days later, would lead to an unlikely partnership forming; one that would lift the spirits of Southwark residents in the months to come.

Shortly after moving to the area two years ago, Aaron quickly became a recognisable figure in the community as a result of his distinctive performances around town.

He began singing aged six, and was introduced to Elvis’ music by his late grandmother, eventually beginning to perform as ‘The King’ at ten-years-old.

Aaron was no stranger to tribute acts; one of his uncles is also an Elvis imitator, whilst another uncle specialises in the sounds of Cliff Richard.

Although Aaron lives with autism and ADT (Attention Deficit Trait), he refuses to allow it to prevent him from achieving his dreams – his main goal is to ‘just make people happy’. It wasn’t until early April that Michael, 61, encouraged Aaron to come and perform on his estate, in an attempt to lighten the mood in their local area.

Michael had concerns that Aaron would miss performing whilst the lockdown required his usual crowds to stay at home, therefore he agreed to be his ‘manager’ – arranging dates and times they would visit different streets in Nunhead, and spread joy to as many people as they could.

Aaron was an instant hit with locals, many of whom had seen him perform before. But, when a neighbour of Michael’s suggested they begin collecting money for charity, the duo realised they could make an even greater impact in their community.

When they learned that the Nunhead Salvation Army, with whom Michael has a personal connection to, only had enough funds to feed the homeless for another week, they agreed that all money raised from Aaron’s busking would go directly to them.

Through approximately 30 fundraisers, they have collected over £2,600 for the charity.

Aaron credits Michael for inspiring him to continue throughout lockdown, even on the nights where he would be performing in poor weather.

Thursday nights, when the nation would clap for its key workers, were always the biggest; crowds would gather in their masses, albeit at a safe distance from one another, in order to sing and dance alongside Aaron and Michael.

Awareness was spread via social media and posters Michael would hang around Nunhead.

Their most triumphant evening came on the final clap on Kimberley Avenue, when a staggering £265 was raised – Michael fondly recalls even the P12 bus driver stopping to make a donation. Resident watches on during the lockdown

Aaron’s dedication to providing relief for his community didn’t go unrecognised – his hard work led to a community youth worker nominating him for the Jack Petchey Foundation Award, which is granted to young people across London and Essex for outstanding achievements within their area.

Cheering up shielding elderly citizens was a standout for Aaron, even if they had to watch from their windows.

Michael remembers each night being an ‘all inclusive’ affair, and neighbours of all ages joining in the fun.

However, their mission is not yet complete: they intend on continuing the pop up shows, as there is still a mission to assist.

They collectively agree that ‘as long as there is the need to help the vulnerable in SE15, we’ll continue’. A documentary film following Aaron during lockdown will have its sell-out premier on Sunday.

Two screenings, both fully booked within days, are being held on September 13. At 5.15pm and 6pm as part of this year’s Peckham and Nunhead free film festival

Made by Six of One, the short film follows Aaron’s love of The King, his community, and how he responded to the challenges of COVID-19.

On the night funds will be collected for his chosen charity, The Salvation Army.

Since the early days of the lock down Southwark News have featured young Aaron Arter in a number of editions – Special mention to Katherine of the paper and Craig Fergus for this recent first in depth interview.

The fund raising opportunities during the recent screenings of ‘The King of SE15’ an excellent documentary that deserves a bucket load of awards, has so far enabled Aaron to raise over £3844 for the Salvation Army here in Nunhead enabling Maria Polis and a team of volunteers to provide weekly meals for the vulnerable in SE15.

Images of the confederate flag were taken in the early lock down period – Aaron had not appreciated it’s controversial significance, the flag was destroyed and I issued an apology on his behalf.

The only ‘correction’ to add, is about the award, Aaron was the recipient of The Jack Petchey Foundation Community Award after being nominated by Katie Worthington (MBE) of The WHYC (Westminster House Youth Club).