He's raised over £2k for the Salvation Army 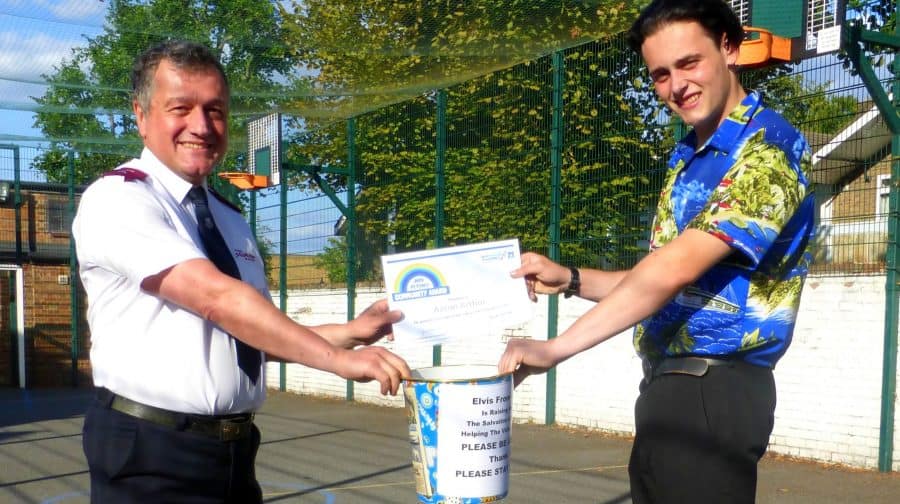 Aaron Arthur, known as Elvis from Nunhead, has been given a Jack Petchey Award after raising more than £2,000 to help feed vulnerable residents during the Coronavirus pandemic.

The King from SE15 has been entertaining residents with regular fundraising performances including during the Thursday clap for carers events in lockdown.

Since May he has collected £2,237 from the generous community for the Salvation Army’s weekly meal deliveries for shielding residents.

Aaron was nominated for the special award by fellow Nunhead local Katie Worthington after a call out from the Jack Petchey Foundation for young people who have made a difference to their community, no matter how big or small, during the crisis.

He was presented with his award at the Westminster House Youth Club in Nunhead Grove on Tuesday evening.

Sir Jack Petchey, now 95 years old, set up his foundation to help inspire young people and has, so far, given away 133 million of his self-made fortune so far.

In a message to Aaron from the foundation explained why Aaron was a worthy winner:  “Here at the Jack Petchey Foundation, we are so proud of all the young people that are leading the way and going the ‘extra mile’ to help individuals and their community in this difficult time.
“This award scheme was set up to recognise acts of kindness and selfless behaviour at this time of need.  You really are setting an example for young people in southwark and beyond.
“Rising to the challenge and doing what you can to help shows a high level of resilience. During WW2 in the blitz, a teenage Jack Petchey also volunteered to help the community.
“When the air raid sirens went off, he hopped on his bicycle, looked for where bombs landed and cycled to the fire brigade to alert them so they could save lives. He knows it is sometimes difficult, but he always says, “If you think you can, you can!”