The Lakanal fire – 10 years on: Timeline of the tower block blaze we thought would never happen again 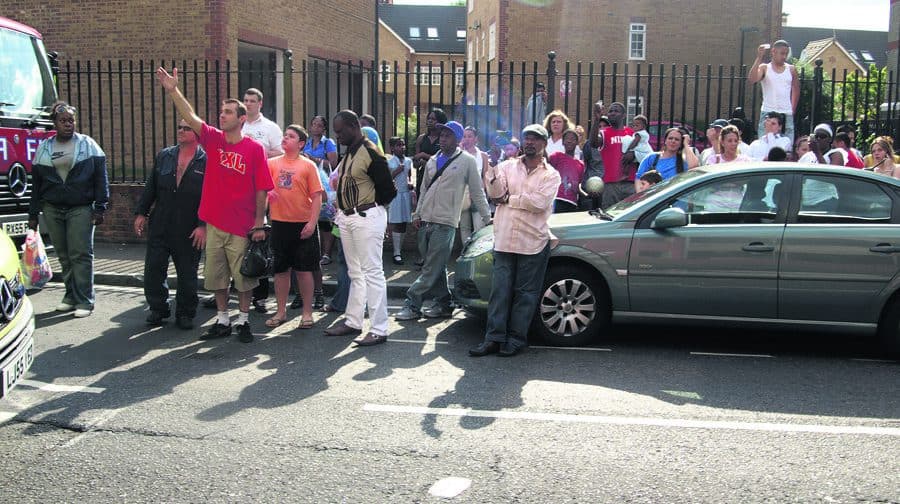 Rafael pictured in the red t-shirt looking on in horror

4.21pm – The flat’s occupant, Jade Spence, calls 999 and fire engines are dispatched to the scene. Catherine Hickman, in flat 79, also calls 999 and says smoke is coming into her flat 4.23pm – Catherine Hickman says smoke is coming through her floorboards. After asking whether to leave or not, she is told to stay.

4.33pm – She is told to lie down on the floor and cover her face

She tells the operator “Oh my god, no listen, I can see flames at the door”. Callers from flat 68 are also trapped in their smoke-filled flat. 4.42pm – Ms Hickman tells the operator “Oh god, choking inside in here”.  At the same time, Rafael Cervi calls 999 and says his wife and children are stuck in flat 81, on the 11th floor, directly above the flat on fire. He says they can’t breathe and the fire is spreading toward their home.

4.44pm – The operator tells fire crews residents in flats 68 and 79 are very distressed. They are asked to force entry as a matter of urgency. 4.45pm – Helen Udoaka calls 999 from flat 82, where she is with her baby, and says they are trapped and ‘everywhere is choked with smoke’.  Still on the line, Catherine screams and says “Something hot fell on me. It’s falling from the ceiling.”

4.48pm – Smoke is seen in flat 53 on the seventh floor and from flat 37 on the fifth floor, blowing downward.

4.49pm – Catherine’s words can be made out for the last time on the line.  At the same time, the operator is told there are crews in flats 68 and 79, and he explains a baby might be trapped in flats 80 or 82.

4.50pm – Emma Ball calls from the first floor and says the fire is moving down, from the seventh to the third floor. She is told: “No, listen, the fire goes up, alright?”

At some point, between 4.50pm and 5pm, Catherine perishes.

4.55pm – Catherine’s flat is an urgent concern, the operator tells crews, because she has stopped talking.

5.09pm – Mr and Mrs Nuhu go out on a balcony, trying to attract attention to themselves.

5.26pm – An operator calls Helen who says she is in the bathroom of flat 81 with her baby and is finding it hard to breathe.

5.27pm – Mr Nuhu makes a makeshift escape rope over the side of the balcony

5.38pm – Dayana Francisquini doesn’t make or receive any calls after this time

5.43pm – Helen Udoaka does not make or answer any calls after this time

6.20pm – Firefighters find Dayana, her son Felipe, and baby Michelle in flat 81 with no signs of life

8.51pm – Catherine is found with no signs of life

8.54pm – Firefighters find Thais Francisquini and Helen Udoaka with no signs of life