An inquest was held into the cause of the deaths, and how the fire spread so rapidly, four years later, in 2013 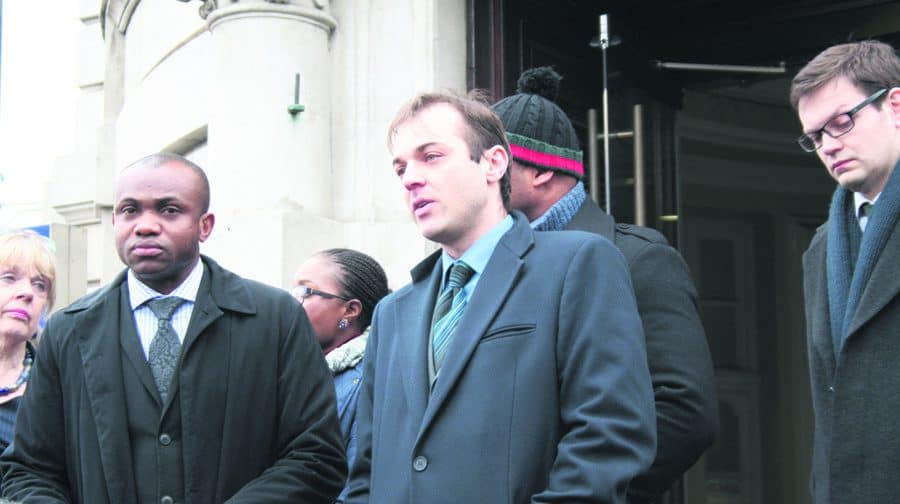 An inquest was held into the cause of the deaths, and how the fire spread so rapidly, four years later, in 2013. Costing £2.1 million, the 50-day inquest saw jurors hear more than 6,016 pages of evidence. Its findings were damning. The fire at Lakanal

The fire spread up and across, but also down, fanned by a prevailing wind.

Survivors, like Norman Ebiowwei, from flat 97 on the thirteenth floor, told of the thick smoke and blazing heat.

“I noticed it was difficult breathing but there was only one thing on my mind. ‘We all have to get out of here’,” he said.

He and his family covered their faces with wet towels and managed to escape.

His next-door neighbour, Georgia Thomas, who also made it out, said: “It was hard to breathe, I could feel my chest burning.

“I had to get my children out of there, describing the scene as ‘just panic everywhere’. The Fire Comissioner at the inquest

Bravery amid chaos and the confusion:

One of the first to enter the block later collapsed from smoke inhalation after rescuing a child, while the firefighter who found the lifeless body of baby Michelle was later diagnosed with post-traumatic stress disorder and signed off work for seven months.

When asked what would have made a difference that day, he told the inquest: “Maybe more resources, man power, a better understanding of plans and the layout.”

Another firefighter who gave evidence said: “I don’t remember hearing about any flat numbers where people may have been trapped.”

A team of eight firefighters had visited Lakanal House just two months before the fire broke out to check fire safety procedures – including escape route methods – on May 2, 2009.

Despite this, at the inquest members of the crew described how some radios failed and it took at least ten minutes to relay key information about who was trapped where on a handwritten note passed to the crew manager after the watch manager was ‘bombarded’ with information.

The jurors heard firefighters arriving to tackle the blaze had no knowledge of layout and didn’t realise the balconies on alternate floors also acted as fire escapes. Victims died because they were told to ‘stay put’:

Catherine Hickman perished alone in her flat while on the phone to emergency services, repeatedly told to stay put even though smoke was coming through her floorboards. They had been told to stay where they were, assured someone was coming to rescue them.

The government’s chief fire and rescue advisor, Paul Holland, told the inquest that operators should tell residents trapped in a building on fire to ‘get out and stay out’, but in high rise flats with a ‘stay put’ policy they should stay in their flats unless affected by smoke or heat during a blaze.

Operators, however, would not know if a building had a stay put policy or not. He also said the stay put policy relies on the building’s materials and design ensuring a fire is contained, giving firefighters a window of half an hour up to four hours.

There were no fire assessments in high risk block:

The inquest heard there were no fire assessments in place at the time of the blaze even though Lakanal House was a high risk building which should have been checked as a priority for fire hazards.

Southwark Council became responsible for carrying out these assessments for its buildings in 2006 but didn’t start until 2009.

But, most damning, it emerged during the major works programme of 2006- 2007, the council had failed to make a building control application, which would have checked the safety features of windows, panels and doors.

Instead, it was mistakenly recorded as having been completed, with the council’s project manager saying she believed the legal requirement was the responsibility of the contractor – when in actual fact it was the council’s.

In these works, panels under the windows were ripped out and replaced with less fire resistant materials – as part of £2.8 million of improvements.

A photo of a previous fire in flat in 1997 showed panels under the bedroom windows were still intact after the contained blaze.

But the new panels burnt within just five minutes.

Jade Spence, who lived in flat 65, where the fatal fire began and was able to narrowly escape, was the first person to raise the alarm.

She dialled 999 at 4.18pm that day after seeing thick black smoke from her kitchen window.

John Hendi QC, who represented the families of those who died, said at the inquest: “My clients have asked me to say to you, however you feel for this you should not feel guilty.

“The fire could have started anywhere at any time.”

After ten weeks, jurors concluded the three women and three children who perished could have been saved.

The verdict was damning, revealing the extent of the council’s failings and missed opportunities to make the block safe.

The 2006-2007 major works and the asbestos removal and replacement with composite panels “had a significant impact on the fire resistance of the external wall of Lakanal House,” described as “a serious failure on the part of Southwark Building Design Services, its contractors and its subcontractors.

The council did not prioritise carrying out the fire risk assessments and failed to assess Lakanal House three years after it became their legal responsibility to do so. Mbet Udoaka, husband of Helen and father of Michelle

Speaking after the verdict, bereaved Mr Udoaka said: “We fear very much that lessons have not been learned and that it could happen again.”

Crucial information which Ms Hickman has passed on during the call about the layout of Lakanal House and how she was being affected by smoke and fire was not ‘shared effectively with, or acted on, by London Fire Brigade personnel’, members of the jury agreed.

The verdicts stated that all six residents would have been able to escape the tower block using the narrow balcony on the east side of the building which led to the communal staircase.

Jurors ruled ‘escape would have been daunting but not impossible’, and insufficient efforts were made to prioritise and locate flat 79, where Ms Hickman lived, which was directly above the home where the fire broke out.

Southwark NewsNewsTHE LAKANAL FIRE – 10 YEARS ON: ‘We fear very much that lessons have not been learned and that it could happen again’