The dark side of picture perfect Dulwich: Author Alice Castle on the inspiration behind her crime novels

'There’s nothing like a nice easy crime read, it can be very satisfying' 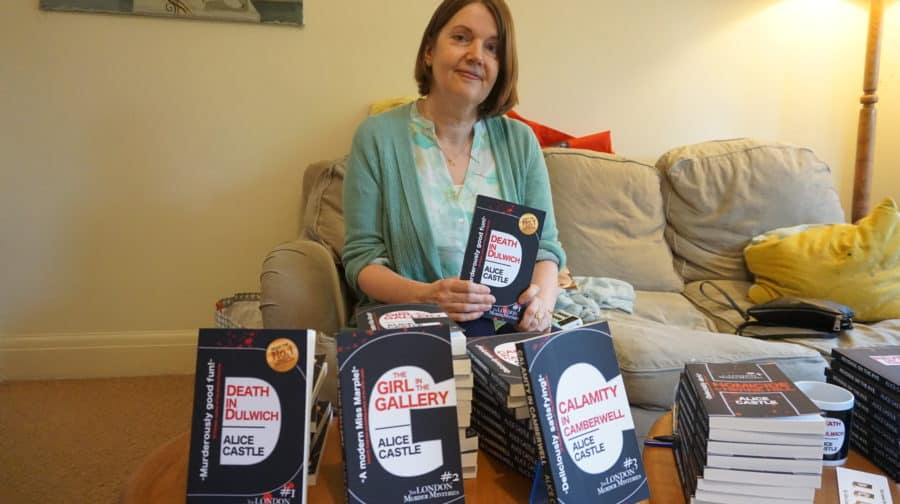 Alice Castle might be the most prolific serial killer in Southwark – if you go by the body count racked up in her crime thrillers, writes Josh Mellor…

With titles like ‘Calamity in Camberwell’, ‘Revenge on the Rye’ and ‘Homicide in Herne Hill’ Alice’s novels have littered corpses across south London.

In Death in Dulwich, the first in her London Murder Mysteries series, a single-mother and sleuth is caught up in a murder investigation on her first day working at fictional private school ‘Wyatt’s’ that could be said to resemble one of Dulwich’s real-life prestigious and pricey public schools like Dulwich College or Alleyn’s.

There was something about Dulwich’s aspirational atmosphere that particularly appealed as a setting for a crime novel, Alice explains, especially seeing the lifestyle from her vantage point as a relative outsider when she moved to the area after living abroad for many years in Brussels.

“It’s a very pleasant lifestyle, I think it’s hard to maintain it,” she says.

“It is too good to be true, and that’s why there’s so much going on under the surface.

“There’s this lovely facade of yummy mummy with their 4×4 cars and the children at very expensive schools but there’s an undertone of unhappiness and tension and all the rest of it, of trying to make this lifestyle work, and that’s the thing that I talk about in the book.

“It’s what causes the murders.”

The culture of over-ambitious parents that make lead character Beth Haldane feel like a fish out of water, another aspect the author has taken from some real-life observations.

“There’s an uber mummy type that you do see at school gates, they’re usually quite daunting women who should be running a small country really, and for one reason or another aren’t working and run their family like a business.

“That can be hilarious but also quite difficult for those around them. A lot of it is about that, and about the things that lead to murders really, social pressures and complications of life and hidden secrets and so on.”

Starting out as a journalist, Alice switched to London-based crime fiction after writing a ‘chick-lit’ novel about a lady living between Brussels and London, playing on the difference between the two countries, gaining a following on the continent.

Her crime stories now have readers from all over the world – including across the pond.

“Even people who don’t know Dulwich, like I have lots of readers in America, who pronounce it Dul-wich, and they don’t even realise it’s a real place. But they like the villagey-ness which they see as a typically British thing.”

Is the main character Beth, single-mother and sleuth, inspired by her author?

“I’ve tried to make it very clear that she’s not me by having her as physically different to me as humanly possible.

“She’s also a million times braver so she will do all the stuff you see in films.

“She’s very brave and completely fearless in ways I could never be.

“She’s a sort of underdog, I want people to sympathise with her and also to feel that they could do better than her, which helps the reader to get into the book, to say she ‘shouldn’t have done that’

“I liked that idea of her being the underdog but always succeeding in the end, I’ve tried to make her as unlike me as possible, but there’s always the danger it she does seem like me.”

Alice is saddened by the continued crime wave in south London. Organised crime and the drug trade are not far from Dulwich geographically, but are a world apart.

“My novels are always a crime with an understandable motive to middle- class people to be quite honest, it’s like an Agatha Christie type puzzle, someone bad has killed someone and we have to work out why.”

Alice was quick to point out that her novels are first and foremost entertainment reading of the crime novel genre that she loves.

“There’s nothing like a nice easy crime read, it can be very satisfying, you can do them in two ways, you can follow clues to the answer or you can let whole thing wash over you like a warm bath.”

And her writing shouldn’t be taken too seriously as a portrayal of Dulwich.

Southwark NewsNewsThe dark side of picture perfect Dulwich: Author Alice Castle on the inspiration behind her crime novels