After his shock defeat last night, the veteran politician for Bermondsey says his ‘fight has not ended’ 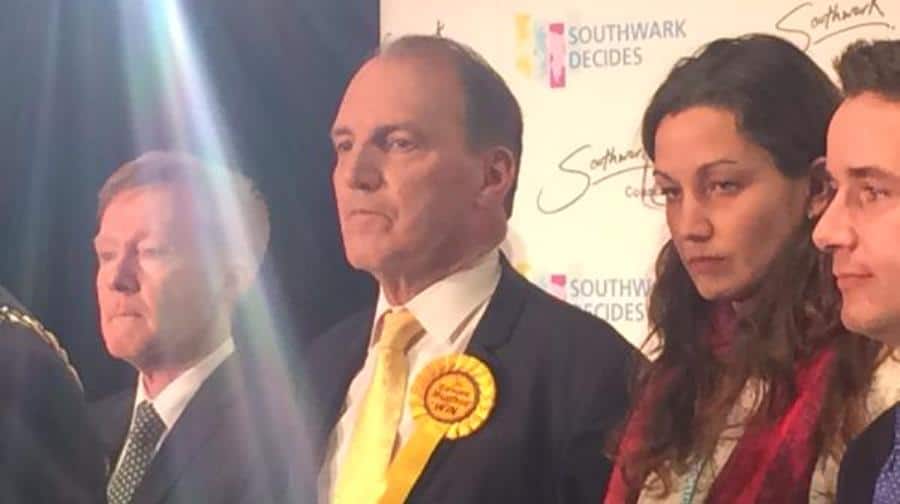 Simon Hughes at the vote count announcement in Tooley Street

Simon Hughes has said his political fight is not over after losing the battle for Bermondsey last night.

In a total wipe-out of Liberal Democrat MPs across the country, the long-serving minister lost to Labour candidate Neil Coyle by more than 4,000 votes.

Speaking to the BBC, Mr Hughes said despite this defeat, his “fight has not ended.”

“I’ve had the huge privilege of being the MP for Bermondsey and Old Southwark for 32 years and we have taken a battering,” he said.

“We had a bruising last night but that doesn’t mean to say that’s the end of a career. Liberalism is as needed as ever.

“The Tory government is not in my view what Bermondsey needs. We need a fairer society and the Tories never delivered that,” he added.

Asked if he would stand again for a seat in parliament, Mr Hughes said it was “too early to answer that question after two hours sleep,” but went on to say, “the fight goes on.”

“The fight in Simon Hughes has not ended. Yes, I lost the bout yesterday but I’ve had the privilege of winning the last eight bouts so there’s plenty more life in the old dog yet,” he said.

The north Southwark constituency was thrown into the national media spotlight as pundits had said it was ‘too close to call’.

But last night’s total obliteration of the Lib Dems, including other senior ministers like Vince Cable, was dramatically clear cut in the end.

Speaking to the News after the result came in last night, a victorious Neil Coyle said he felt “amazing.”

“What a privilege, what an honour,” he said. “This is my home. This is where Sarah and I want to have our family, to be the MP to be serving is a privilege, it’s an honour. I can’t wait to get stuck in.”

Mr Coyle, 36 was gracious in his victory speech, saying: “I would like you to acknowledge the three decades of contribution that Simon Hughes has made to people’s lives in this community through case work.

“We know that the verdict of the people of Bermondsey and Southwark is not a verdict on Simon Hughes – it was a verdict on five years of Cameron and Clegg’s coalition,” he added.