There’s no stopping The Menace: Back Peckham Town PC as they embark on their biggest game yet despite ongoing vandalism 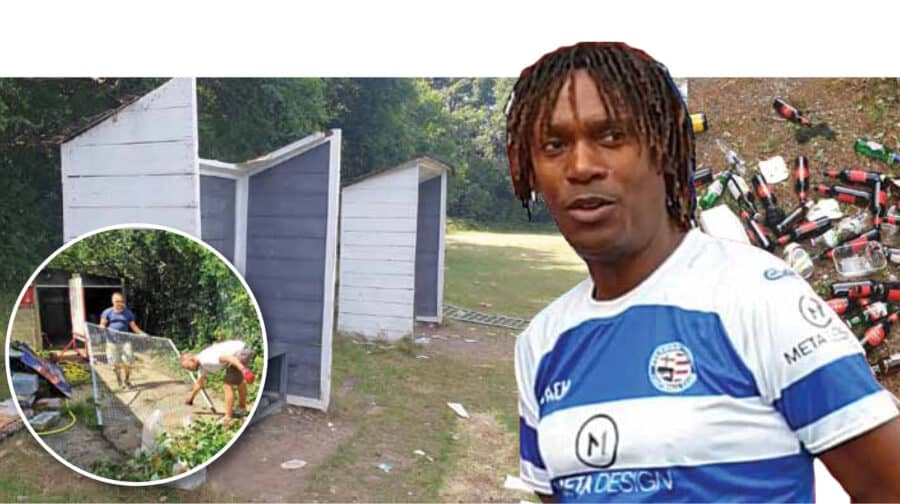 Peckham Town FC founder Bryan Hall (pictured) with some of the extensive damage and repair work.

Peckham Town FC is poised to stage a remarkable comeback as it competes for the London Senior Trophy tomorrow after months with no play, no income and repeated, heart-breaking attacks by vandals.

On Friday the Menace will take on Cray Valley Paper Mills FC in their first match since lockdown.

Since the Coronavirus pandemic, the club’s two sites have been victim to regular attacks – believed to involve the same group – running up thousands of pounds worth of damage to a club already struggling financially. As the News has reported, the club has had its dugouts destroyed with wood used for BBQs and fires, fly-tipping, goal parts smashed and rubbish and litter strewn across its Southwark Council-owned pitches. The dug outs had been handmade and paid for by subs’ funds.

The ongoing problems have caused a huge amount of heartbreak to players, fans and volunteers and the club’s founder Bryan Hall.

During the pandemic the club was left without its income but still had hefty running costs.

But the shocking damage has also brought out the best of the community as supporters have turned out to help get the club back on track.

On August 1, the club held one of several planned volunteer days where supporters and well-wishers including members of Southwark’s GoodGym helped tidy and repair the arena for the new season.

The club has also been busy recruiting new players across its teams and is now hoping as COVID restrictions ease and the pitches are in use more frequently the vandals may think twice. Duncan Hart, from Peckham Town FC, told the News: “We have been able to return to training this month following the lifting of lockdown measures.

“Unfortunately, the vandals keep returning to our site to cause further criminal damage.

“They have taken wood from the roofs of our dugouts and lit fires on the youth pitches, and smashed bottles with the glass getting on pitches, which is obviously incredibly dangerous.

“We are indebted to volunteers at the club and from the wider community for helping us clean up the site on several occasions now.

“We are continuing to work with the police and council to try and prevent further damage.”

Hart told donors on the online fundraising page that the club was moved by the support of a community that had “put their arm around us during this difficult time.”

The London Trophy final was scheduled to be held last season but postponed when lockdown came into force.

A limited number of socially-distanced seats are on sale for the game, with some available at the gate on the day.

The next season will begin at home from Saturday, September 5, against Borden Village, with season tickets costing just £30, and the club hopes fans left without Premier League matches may be inspired to come along. “Despite these troubles, we are excited to start the season,” Hart told the News.

“We hope that Peckham turns out in force to support our guys to bring the cup back to Southwark.”

A Southwark Police spokesperson said no one had been arrested but extra patrols were in place to help deter vandals: “We are aware of the recent incidents that have occurred at Peckham Town FC and have been engaging with the operational management team on site.

“We will be working alongside the council to support the football club and all community members that are affected by this antisocial and criminal behaviour.

“At this stage no arrests have been made but we will continue to put measures in place to ensure that any offenders are identified and further incidents are prevented in the future.

Acting police sergeant Jonathan Adams and his team will be proactively patrolling the area to prevent further offences and identify those responsible.

“We want to encourage the local community to speak with our officers to discuss any concerns that they may have.

“Anyone with information about the ongoing vandalism or antisocial behaviour at Peckham Town FC should call 101 and quote ‘VAMD20662’.”

The London Cup Final will take place at Cray Valley Paper Mills FC on Friday 28 August, with kick off at 7.45pm.

Southwark NewsNewsThere’s no stopping The Menace: Back Peckham Town PC as they embark on their biggest game yet despite ongoing vandalism