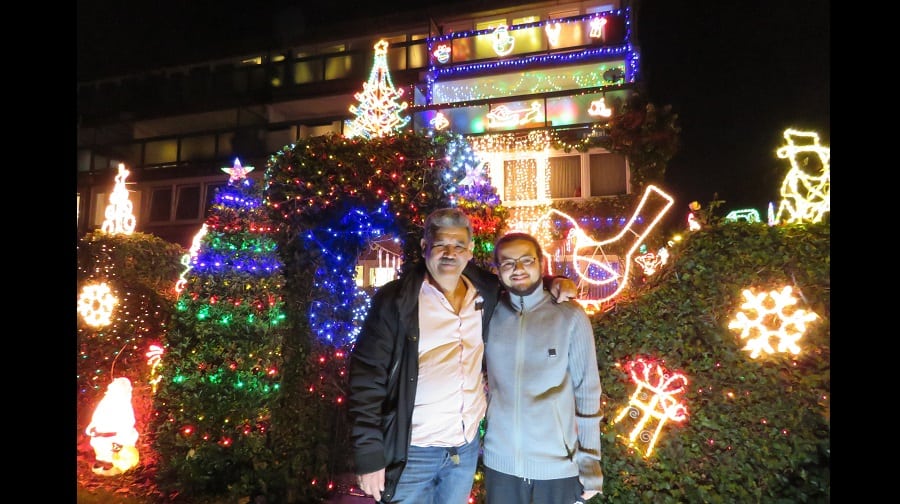 A Walworth family have gone all out to make their Christmas lights display one of Southwark’s best, and it’s all for the charity that saved their son’s life.

It takes them up to five days working with their neighbours in the flat above to sort out the incredible display, which has snowballed over the years.

It goes back to when Alex Mustafa was diagnosed with leukaemia, aged on four. It rocked his family, who live in Albany Road on the Aylesbury Estate.

After making a recovery, Alex then relapsed with a second bout of the disease when he was twelve. This time his doctors were out of options, as they feared further rounds of chemotherapy would be too damaging for his young body.

That, his dad Gunalty said, was when the Anthony Nolan Trust reached out and offered them a lifeline.

Gunalty, 64, said:  “The lights are to raise money to Anthony Nolan. He got in touch with us, and he helped Alex find someone who matched with him for a bone-marrow transplant. That was the only thing that could help him.

“We do these lights because we want to put out an appeal. We want to raise money for Anthony Nolan.

“We don’t collect money from people, but we ask friends to donate to them. And we get a lot of people that come and talk to us about the lights, with children who want to come and have a look, so then we tell them and their parents about the charity.”

Alex, now 21, and working as a teaching assistant at St Paul’s Primary School, said: “I had to miss one year of school in Year Four, and in Year Eight. It was two years of my education that I lost.

“We think the lights add a bit of cheer to the area. People stop and take photos with their kids next to the Santa.”

Gunalty added: “We’ve been doing the lights since he was diagnosed, and it’s grown every year. It took us five days this time. Our neighbours who live above us join in as well.”

Visit www.anthonynolan.org to find out more about the charity.