Evie, who lives on the Tustin Estate, has been plagued with rodent problems

A Peckham council tenant who has been plagued with rats says she has been forced to wash her clothes by hand since September, because the rodents destroyed her washing machine.

Evie Enakimio lives on the Tustin Estate, and along with her neighbours, has experienced problems with rats for years, as they chew through the walls which connect the flats to the bin rooms.

The News has previously reported on the problems faced by three tenants of the estate, including Evie, in 2017.

But now the 32-year-old says the rats have come back, breaking her washing machine in the process.

She cannot afford to replace it, as she lost her job because of the pandemic in June. “I don’t sleep, it really upsets me,” she said. “Because every little noise, I think it’s the rats. I have to be so careful, because I have been bitten by something in the past.”

Pest control officers at the town hall were called out to her flat at the end of last year to block up a hole in the wall through which the rats were pouring. 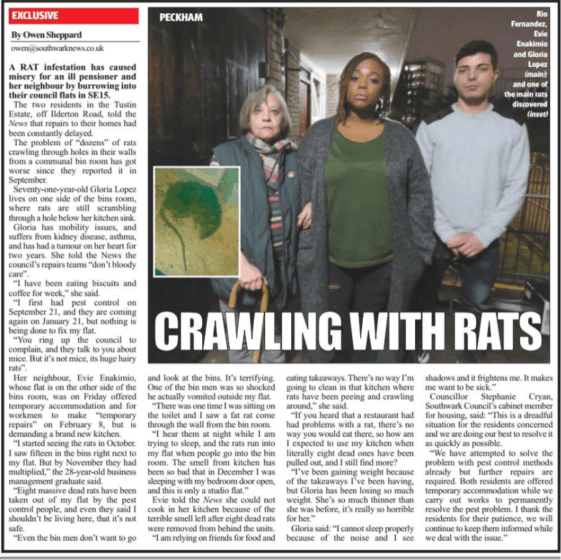 Our 2017 story on rats plaguing residents of the estate

Since then, Ms Enakimio says she has not had any live rats in her flat. But she says that officials should replace her washing machine, because if they had put together a long-term solution in 2017, the rats would not have come back.

“I was warning them last September that the rats had come back, and it took months for them to repair the hole,” she said.

“They replaced the cabinet, but I think they should also replace the washing machine, because I told them again and again this would happen.