Despite doctors saying Bethany needs a ground-floor flat, her family are stuck on council waiting list 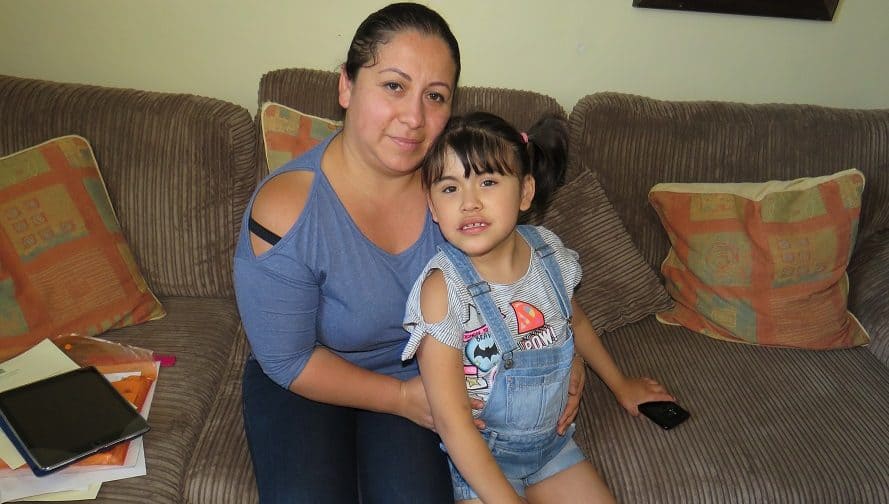 Bethany, with her mum Sandra in their Rockingham Estate flat.

The mother of a little girl with a rare condition that means she only sleeps a few hours a night has told of her fears their home is “an accident waiting to happen”.

According to the Smith-Magenis Syndrome Foundation, the key symptoms of the condition are learning disabilities, severely disrupted sleep patterns, delayed speech and language skills, distinctive facial features and challenging behaviours like self-harm, aggression, impulsivity, and hyperactivity.

Bethany only sleeps a few hours a night, hits herself when she is angry and frustrated, and picks and scratches at her skin. Bethany and her brother have to share a bedroom

Her mother, Sandra, told the News: “I knew as a parent from the moment she was born something was wrong. She was delayed in sitting up, and delayed all the way along.”

Eventually, genetic testing confirmed her diagnosis. “A good day,” Sandra explained, “is that she cooperates more and is less angry towards herself.

“But on a bad day she will be very, very angry, hurting herself a lot. That mainly happens when she is very tired.

“Going out, for example, is quite a struggle because she could just run into a main road.

“I have woken up in the night, felt a draft, and realised that she has somehow got outside.”

She described the family’s third floor flat, which has a communal walkway outside overlooking a carpark and gardens, as “an accident waiting to happen”.

In 2014, doctors confirmed it was “medically vital for her to move”, and recommended a “three bedroom, ground floor property with central heating and a garden”, to ensure that “Bethany has a bedroom for her sole use”.

Despite the assessment being backdated to 2013, the family remain stuck on the council’s waiting list for a larger property, with Bethany and her seven-year-old brother Alejandro, still sharing a bedroom.

Right now, Sandra’s immediate priority is trying to get Bethany a safety bed, but she has long-term fears for both Bethany and Alejandro, and said: “His sleep is constantly interrupted and he is falling asleep at school. He can’t even play in his own room because she is disruptive.”

She said Alejandro has struggled with his sister’s challenging behaviour and at one point did not speak for three years, later telling his mum he felt that “Mummy loves Bethany more than me.”

Bethany was permanently excluded from her special school when her aggressive behaviour started posing too much risk to other pupils, meaning Sandra is a full-time carer with support from Bethany’s grandmother and a respite carer at the weekend.

“I’m not trying to look for a bigger home for my own benefit. It is for her, and to try to avoid the risk of her having any more problems than she already has.

“I’m worried that if those issues of anger and frustration are not treated properly now, that it will escalate even more as an adult and she can hurt herself else. I can’t even lift her myself anymore. It really worries me.

“Her condition is unpredictable. It could get worse or improve. But a safety bed and her own room will make a big difference.”

Councillor Stephanie Cryan, Southwark Council’s cabinet member for housing, said: “This family is overcrowded where they are living and I fully appreciate both how hard it must be to care for their daughter and how important the respite offered by family members can be.

“The Pereira family were assessed for their housing need and do qualify to bid for a three-bedroom home, but there was no medical requirement for Ms Pereira’s mother to also be living at the same address.

“We will continue to support them in terms of options for their daughter’s education and care, as well as the housing issues.

“There is a huge demand on the supply of homes in Southwark, particularly larger properties, but I hope that we can work with this family until they find a solution that works for them.”