Volunteers set up the community space outside the derelict Grove Tavern 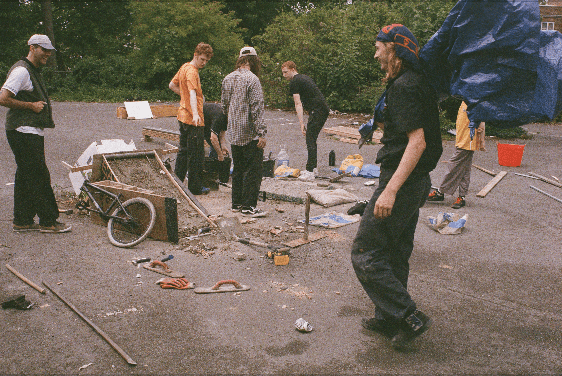 Nearly 3,000 people have signed a petition to keep a DIY skatepark in the car park of an abandoned pub in East Dulwich.

The Grove Tavern has been empty and boarded up for eight years. In the last few months a group of keen skateboarders have taken the overgrown and unused car park and created a homemade skatepark and community project – only to be ordered to leave by its land owners, the Dulwich Estate.

Kyle Creaton, who set up the Change.org petition online, explained: “It’s been out of use for years and as soon as people have shown a genuine interest with the spot, we are being told it’s due to be knocked down, you can’t have it anymore. Demolished.

“If it was up to me I’d say stop acting like a child who wants to now play with a toy that someone else picked up while it was left on the floor in your possession.

“It doesn’t seem fair to pick and choose when you want to care and not.

“It’s a place for everyone of any age to come and have a laugh, learn something useful like how to mix cement and build structures and design something that came from their mind, have a skate, make friends, learn social skills and even talk about your feelings if you’ve had a bad day and don’t know how to talk about it.

“Especially the younger generation. There’s an abundance of wild blackberry trees which have been used to fuel some young minds to even make their own homemade jam. The possibilities are endless.”

The group say they have actively tried to tidy the area, keep it safe, and also prevent the derelict building from being broken into.

The Grove Tavern, previously a Harvester, has been empty since a fire outbreak in 2012. Numerous meetings have since been held by concerned residents over the deteriorating building which still has a lease, by pub chain Stonegate, until 2025. Southwark Council has also earmarked the site for future homebuilding – but development plans have failed to make headway.

The community has rushed to the group’s defence with many messages of support online including via the East Dulwich Forum.

“These lads cleaned up a derelict wasteland and turned it into something positive,” wrote one backer. “There’s some real community spirit at the Grove DIY. It’s a good thing. It will be a shame to have it destroyed only to turn back into a wasteland.”

Another said: “I live right next door to the pub these lads are doing nothing wrong.

“They are a very polite and helpful group. They are trying to build a community where kids can go.

“If the land owners are so worried why don’t they do something? It’s an eye sore living next to it…

“These lads keep it clean and tidy and are no bother. Allow them to keep doing what they’re doing.”

A Dulwich Estate spokesperson told the News on Wednesday: “The land is leased by the Stonegate Pub Company which has a responsibility to maintain the site and keep it safe.

“Although we are supportive of community projects, the current use of the land as a skatepark does not have the permission of the leaseholder.

“We understand a conversation about this site is ongoing between Stonegate and local councillors.

“We hope it can produce a positive outcome for the temporary skatepark.

“However in the longer term the land will be redeveloped. Discussions for mixed use development are also ongoing.”