The protesters were marching against what they described as 'social cleansing', as communities are cleared out of their old homes to make way for regeneration 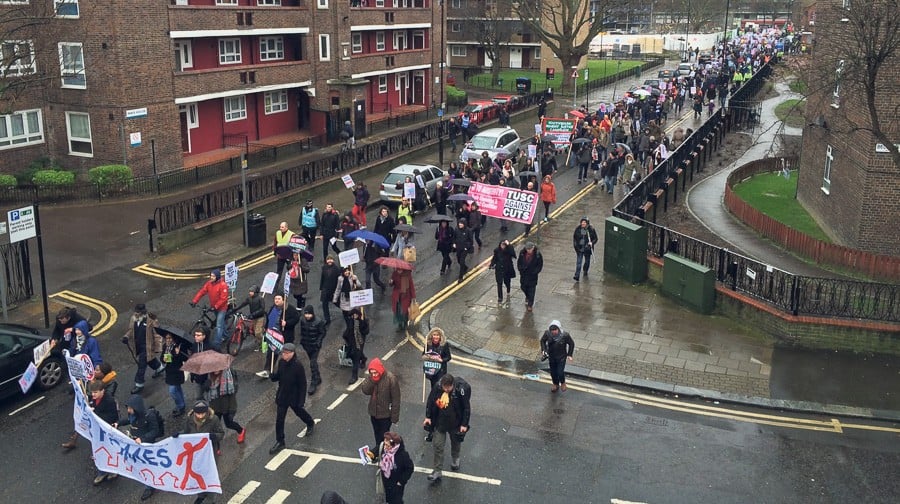 Thousands of demonstrators gathered outside City Hall on Saturday to demand lower rents, fairer tenancies and more affordable housing in Southwark and the rest of the capital.

The March for Homes saw 2,000-5,000 people converge from different points in the city to call on Boris Johnson to find a solution to London’s housing crisis.

Hundreds of protesters met in Elephant and Castle, where they congregated in the shadow of One The Elephant and listened to speeches.

Among them was Alastair Stephens, chair of South London People’s Assembly, an anti-austerity group who co-organised the event along with Defend Council Housing.

He told the News: “It’s social cleansing. The Heygate Estate’s gone, the Aylesbury Estate is going to go and social housing is going to be replaced with luxury housing.

“There is going to be an explosion over this at some point in time. People are becoming very, very angry.”

The route wound through Walworth and Bermondsey, taking the crowd past a variety of housing developments, both affordable and unaffordable.

Traffic came to a standstill along the route, with many drivers honking their horns in support. Other people watched on from the windows of their homes and workplaces.

Some activists occupied the luxury One Tower Bridge complex during the march.

He has lived in Southwark all his life and his family were one of the first to move into the North Peckham Estate.

He said: “When I was brought up, council housing was what you expected. I lived in council homes, all my friends did and all their families did. That’s not what people now have.

A spokesperson for Southwark Council said: “In Southwark we are tackling the housing crisis head on and in the last three years we have built more affordable homes than any other London borough.”