Three Bermondsey supermarkets vandalised within hours of each other 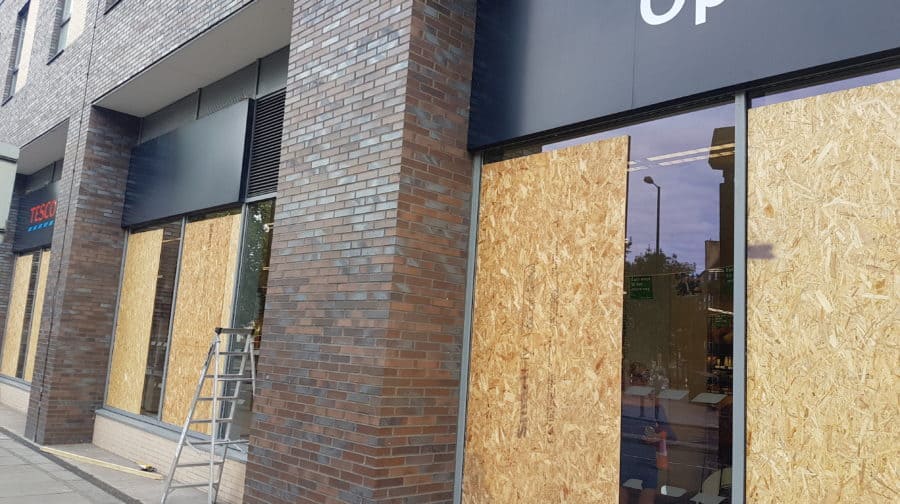 The Tesco on Jamaica Road had many of its windows smashed on Sunday, with two other Bermondsey supermarkets affected

Three Bermondsey supermarkets had their windows smashed within hours of each other yesterday, sparking a police investigation for vandalism.

More than twelve panes of glass were visibly shattered at the Tesco Metro store in Jamaica Road as the shop opened for business on Sunday, which the business described as ‘vandalism’.

The shattered glass was replaced by boards by the afternoon, pending permanent replacement.

The Tesco superstore near the Old Kent Road was also the victim of vandalism on Sunday, according to the company.

The Sainsbury’s Local by Bermondsey station on Jamaica Road – just minutes away from the Tesco Metro – appeared to have been the victim of a vandalism incident too, with one of the shop’s windows and its automatic doors bearing visible damage. The Sainsbury’s local, just minutes away from the damaged Tesco, also appeared to have had a window smashed

A spokesperson for Tesco told the News: “Police are investigating incidents of vandalism at our Bermondsey Spa Metro and Southwark Superstore over the weekend and we are assisting them with their inquiries.

“Both stores are open as normal.”

A spokesperson for Sainsbury’s described the damage to their shop on Sunday only as an ‘incident’ but added: “We’re supporting the police with their investigation.” Both supermarkets’ outlets are still open for business despite the vandalism.

The News has contacted police for comment, but has not received a response at the time of publication.

Southwark NewsNewsThree Bermondsey supermarkets vandalised within hours of each other