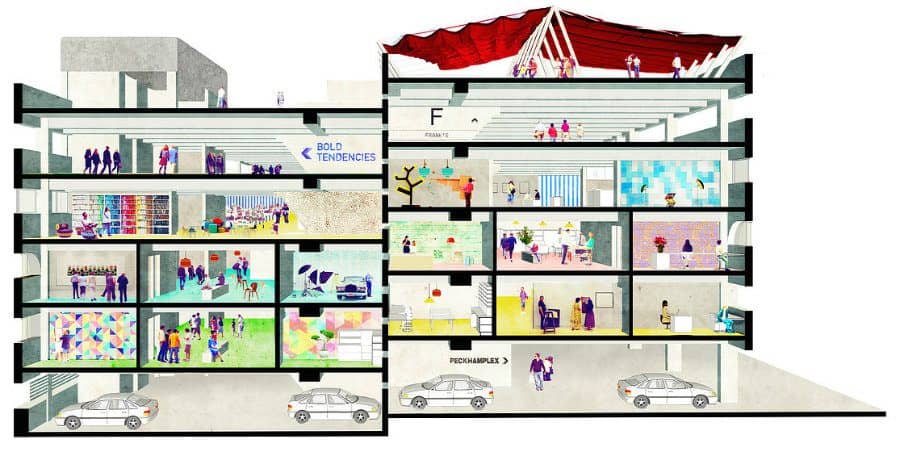 The long-awaited Peckham Levels project to transform the town centre car park into an arts and enterprise hub has been given the green light by Southwark Council.

Councillors on the authority’s Planning Committee approved the scheme on Tuesday, which will open up 8,731 square metres of space in ten levels of the six-storey car park.

Carl Turner, whose architectural firm were behind the plans and collaborated with other grass roots community groups, said he was “Extremely excited to be bringing an innovative project to Peckham”.

“With planning committee it’s always nerve racking, but this looks to become a big success that can build on the strength of the Peckham Plex, the Bussey Building and Frank’s Café,” Carl said.

“We’re going to build it in phases, with levels one and two hopefully completed by October. It has had already had a massive amount of interest with artists and professionals wanting to enquire about booking studios. We’re looking to optimise our profits, not maximise them. We’re offering very cheap workspace time for ordinary local folk and in return we ask that they commit to one hour a week and give a little bit back.”

According to the plans, the basement and ground floor of the Levels project will become a main entrance for tenants and visitors, while retaining 31 public parking spaces.

In the basement, and up to floor two, there will be a focus on artist, with studios, workshops, dark rooms and rehearsal spaces. Three to four will focus on start-ups and digital media and include co-working spaces, editing suites, photography studios and meeting rooms.

Many of the studios on each floor will be free to use until 1am, seven days per week, while workshop spaces for ceramics, photography, printing, laser cutting, and dark rooms will open from 8am to 9pm daily.

The change-of-use permission was awarded by the council on a five-year temporary basis.