See which charities they're running for, and what on earth is keeping them going? 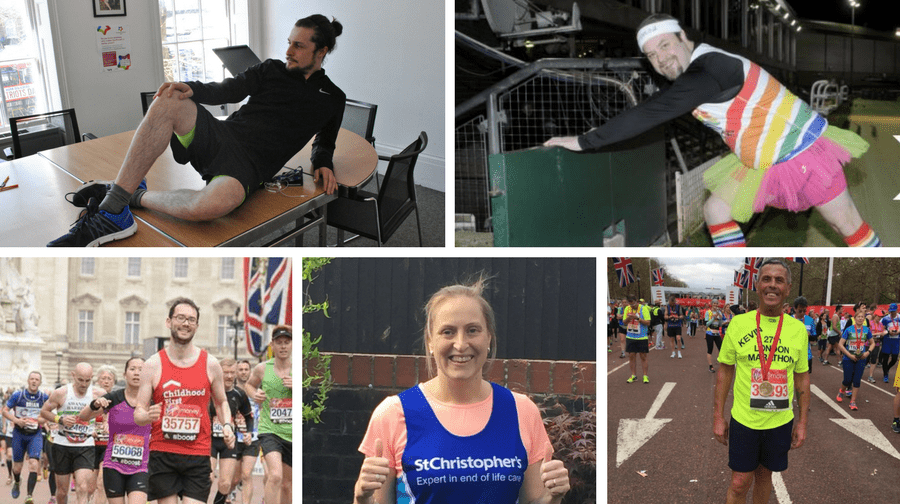 The London Marathon is little over a week away and runners will be putting themselves through their final paces to limber up for the 26-mile challenge.

The starting gun on April 23 will denote the race’s 37th year and the iconic route will start at Blackheath, finish at Pall Mall and cut through a range of London boroughs on the way – including Southwark, of course.

Runners will pass through Surrey Quays, Rotherhithe and Bermondsey before crossing the Thames at Tower Bridge, where they’ll approach their 13-mile half way point.

Southwark has no shortage of home grown runners and the News asked readers to get in touch to tell us who they are and what they’re running for.

Below are just eleven of the local people who’ll be hitting the tarmac a week on Sunday.

Nearly a year on from being elected Labour councillor for Newington ward, James, 31, will be taking on his second London Marathon.

“I did the 2015 London Marathon in three hours and 49 minutes,” said the Bermondsey man. “But I’ve been a bit sick recently and had time off work. So if I can get around without having to stop and walk, I’ll be happy.

“I do the Southwark Park Run whenever I can, and I did the North London Half Marathon a few weeks ago.”

James will be running for the Mayor of Southwark’s chosen charities: Surrey Docks Farm, The National Autistic Society, and the Mayor’s Common Good Trust.

The Liberal Democrat councillor for Bankside ward said this year’s marathon would “probably be my first and last”.

But not unlike the other runners the News has spoken to, David came down with an injury, which forced him to take a three-week break. He then also caught a cold which set him back four weeks.

The 50-year-old is raising money for the Mayor of Southwark’s two chosen charities: Surrey Docks Farm and The National Autistic Society, as well as the Mayor’s Common Good Trust, which benefits the borough’s less-well-off with food and essentials.

David said: “I struck a deal with the Mayor that if I break my target of £1,300, I’ll raise money for my own chosen charities in my ward.”

He will also raise money for Reker Ahmed, the seventeen-year-old Iranian Turkish refugee who was brutally assaulted at a bus stop in Croydon, in what police are treating as a hate crime.

Bill has been squeezing his marathon training between working night shifts as a lorry driver for the Royal Mail, “so we can all get out post in the morning”.

The 41-year-old from Salter Road in Rotherhithe said this will be his first marathon, and the biggest long-distance test since his cross-country running days at school.

Bill said: “I’m looking forward to seeing my family and taking some pictures and videos at the cheering points: at about thirteen miles and 22 miles.

“I’m running for VICTA, a charity for blind and partially-sighted children. I’ve got a nephew with a degenerative sight problem. It’s a charity that’s close to my heart.”

Bill is hoping to raise £1,350, and has been helped along the drinkers at The Good Intent pub in East Street.

On his first marathon, Frank from Kennington will raise money for two mental health charities: Young Minds and Heads Together.

“It’s a charity that’s close to my heart,” the 43-year-old meteorologist said.

“I speculatively applied and I got a phone call long after I was expecting to hear back. It was in the middle of October, it was completely un-expected.”

Frank is also doing the RideLondon-Surrey 100 mile cycle on July 28. Visit http://uk.virginmoneygiving.com/OurFrank to give him a donation.

Rotherhithe lad Freddie will run his first London Marathon in memory of his late friend Tommy Blackmore, the 20-year-old who was June 2015 while trying to be the peacemaker in a fight near Tower Bridge.

Freddie, from Globe Pond, was meant to run the Marathon last year, but had to pull out after suffering an asthma attack. But this time he his more than half way to his £2,000 target for Multiple Sclerosis UK. The charity have helped look after Tommy’s mum, who suffers from multiply sclerosis.

Claire, who grew up on the Aylesbury Estate, will run her first marathon for St Christopher’s Hospice in Sydenham where she works as an administrator.

“I’m amazed by the service the nurses at the hospice provide, I take my hat off to them,” Claire said. “It’s end-of-life care for adults, and we visit patients in their homes and allow them to die where they want to, rather than in hospital.”

The 39-year-old aims to raise £2,000. She says the only previous running event was a 10km Race for Life in Blackheath. Visit uk.virginmoneygiving.com/ClaireRayner1 for Claire’s page.

The 28-year-old from Plough Way in Rotherhithe aims to raise £2,000 for the Make A Wish Foundation. He will also be running in memory of his nephew, who died of meningitis aged five.

“The fundraising is going pretty well,” Dan said, “but a few of my mates don’t believe I’ll finish, so they’ve said they’ll only put the money in when they see me cross the finish line.”

“I’ve done a couple that were eighteen-and-a-half miles and I mix it up. I was just saying to myself ‘let’s run as far as I can until I can’t run anymore’. I didn’t think I had it in me.”

The literacy-support worker at Cavendish School in Bermondsey has said she’s raised over £1,000 for Make A Wish Foundation, and told the News she wanted to help a children’s charity that’s not far removed from her work.

Lauren, 25, from Albany Road, said this London Marathon will “probably be my first and my last”.

“I’ve decided I’m not a natural born runner. I’ve had a little injury, but the training it alright”. Lauren will be running with two friends from Wimbledon and Bermondsey.

Visit her fundraising page at: https://www.justgiving.com/fundraising/LaurenMurray-7.

Alison Yuen will be running her first ever marathon to raise money for London-based charity Get Kids Going.

The 24-year-old, who lives in Borough, is keen to raise £2,000 to help get disabled children the equipment they need to get involved in sport.

“Get Kids Going provides grants and equipment for disabled children and young people up to the age of to help them take part in a variety of sports,” said Alison, who works for law firm Howard Kennedy.

“It typically costs £2,000 for specialist sports equipment so I just want to raise as much money as possible. A lot of families can’t afford to send their children to do certain sports because they need that equipment.

“I want to raise money for the cause because I’m very active myself and there are people a lot younger than me who haven’t been able to get involved in a particular sport and I just think anybody should be able to take part in any sport they like.”

Alison says she is not a runner but her training is going well and she is planning to complete the 26.2-mile challenge on her own.

“I’m really nervous but I think as I get closer to the day I won’t be as nervous as I am now,” she added.

Martin, from SE1, is running for VICTA, the charity supporting visually impaired children.

“I ran for them last year,” the 41-year-old said. “They said they would love for me to run for them again. My niece is visually impaired, so it means a lot to me.”

Martin’s last effort at the London Marathon, which he also did for his 40th, saw him raise £2,015, and finished after six hours. This year he’s already raised over £1,900.

This will be Kevin’s 28th London Marathon, after he pledged to run one every year after his daughter Laura was born prematurely.

But this time 58-year-old from Bermondsey will be running with Laura and her boyfriend Charlie to raise money for the charity DEBRA, for “for people whose skin doesn’t work”.

Kevin has run several marathons for St Thomas’ Hospital, but started running for DEBRA after seeing the front page of the Southwark News on September 27, 2012, which featured an appeal to help Rotherhithe girl Maisy Keetch, who suffers from Epidermolysis Bullosa.

This Friday Kevin will host a charity fun night at the Blue Anchor pub in Southwark Park Road from 5pm, with £5 entry.

Rob, 29, will run his first marathon at the behest of his boss, the chief exec of Community Southwark, a body which supports volunteer groups in the borough.

Rob had just returned from a 20 miles run during his lunch break when he spoke to the News on Tuesday.

He said: “I was at the pub with my mates and they were making fun of the fact that I smoke, and they bet me I couldn’t do a marathon by 2017. Then at work we found out Southwark Council had six places to give away for local charities. My boss asked me to do it because he said it would ‘give us a lot of publicity’. I said yes but regretted it instantly”. 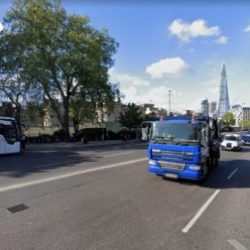 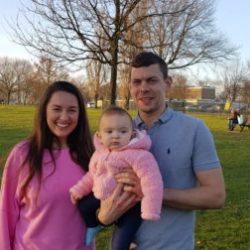 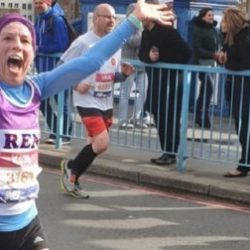 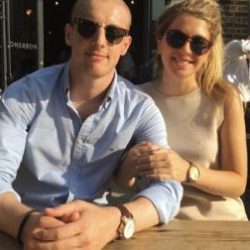 London Marathon 2019: Two years to the day after his Hodgkin lymphoma diagnosis, Herne Hill's Toby is running for CLIC Sargent 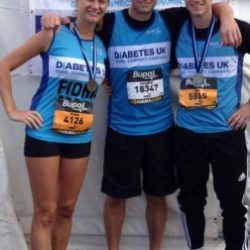 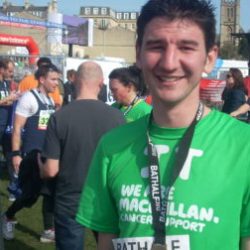 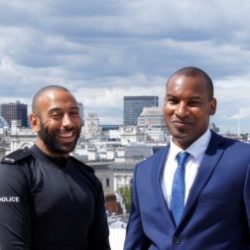 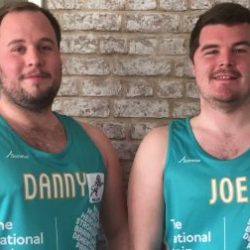 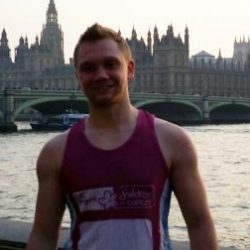 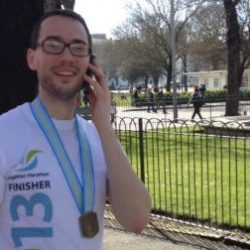 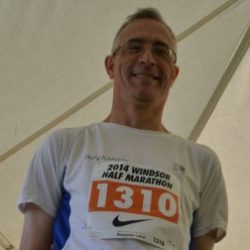 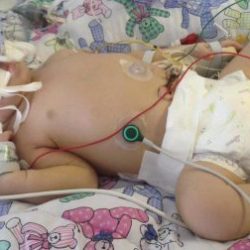