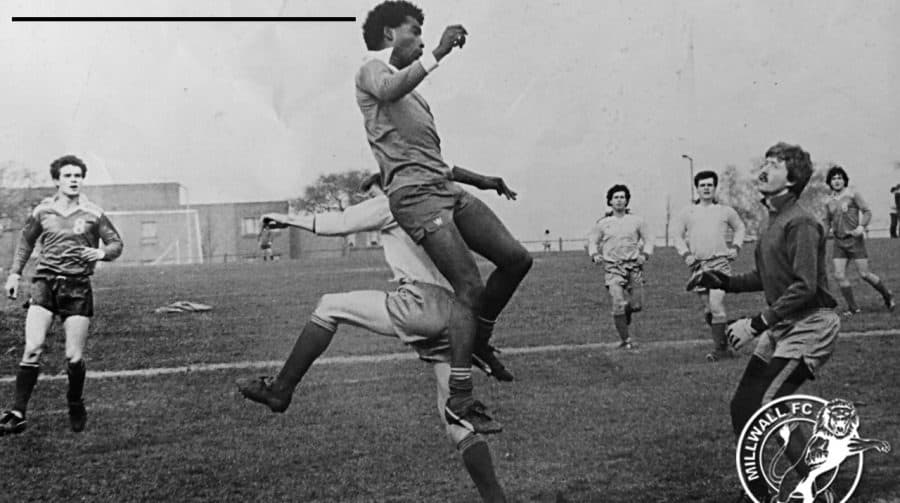 A legendary Millwall fan was honoured on Saturday with a tribute night which raised hundreds in his memory.

‘Tiny’, who stood at well over six feet tall, went down in the Den’s history books for being a die-hard black Millwall supporter from the late 60s, defying the racist reputation of some of the fans at that time.

For more than twenty years Tiny (real name Ian Garwood) was the ‘big daddy’ of the ground, keeping young fans in line and watching out for the rest of the pride if any trouble flared up.

When the private family man died from cancer in December 2012, he was given a ‘guard of honour’ by fans and players at the club, who lined the football ground in Zampa Road for his funeral procession.

Now the next generation of fans is celebrating Tiny’s memory as a symbol of multi-racial Millwall.

“Fans are always being portrayed as thugs and racists but I want to show a more positive side to Millwall,” said Quince Garcia (pictured above with Zampa) , who ran a fundraising tribute night to Tiny at the Nag’s Head in Camberwell on Saturday.

Quince, 36, himself a black Millwall fan raised £250 on the night by selling T-shirts and other merchandise bearing pictures of Tiny to fund youth workshops for disadvantaged young people run by his company Roadworks Media.

The Camberwell-born entrepreneur has joined forces with Tiny’s family to celebrate his memory while raising money to help train young people and get them into work.

“Our aim is to raise awareness for what Tiny loved – being a part of Millwall F.C and being part of a community he had huge affection for,” said Quince.

“We don’t want to glorify his past,” added Quince, who acknowledged Tiny did have a reputation for being able to handle himself in the ‘Camberwell Crew’. “It’s about what he represented, which was much more than that – he was able to break down those barriers,” he added.

Fellow Millwall fan, Kevin Downey, 55, knew Tiny since the mid-seventies and said despite his name he was “larger than life”. “He was quite a comedian – “he’d always make you laugh,” he said fondly. “When you walked in the room he’d put a smile on your face.”

When asked if Kevin was aware of Tiny ever being on the receiving end of any racism, Kevin said: “They wouldn’t dare say it to his face or to anyone else’s who knew him. It didn’t matter what colour you were – it was Tiny.”

‘Tiny’ aka Ian Garwood, sadly died of cancer in 2012 but lives on as an inspiration to other black Millwall fans