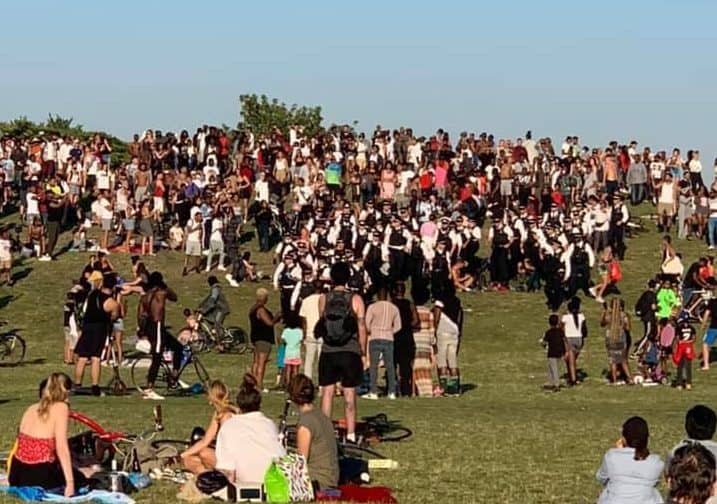 Dispersal zones were in place in Burgess Park and neighbouring Aylesbury Estate over the weekend after tip offs about planned unlicensed music events.

Another dispersal zone was also in place in Tabard Gardens, due to ongoing anti-social behaviour, along with the entire borough of Lewisham.

Despite extra patrols, officers still had to break up events in Burgess Park, Clapham Common, Tooting Bec, and in Wembley.

Several Aylesbury Estate residents have told the News all-night parties have kept them awake until the early hours for days at a time over the last few weeks.

A Section 35 Dispersal Zone has been authorised between 1400hrs on 26/06/2020 and 1400hrs on 28/06/2020 covering Burgess Park and the Aylesbury Estate. This is in response to information received about a possible unlicensed music event. pic.twitter.com/v8JguDr5Wp

Groups are also congregating in the closed-off children’s playground with speakers pumping out music at full volume during the daytime.

Added resources were thrown at the problem days after violence broke out in Brixton after police attempted to break up an out of control 400-strong street party in Brixton, leaving 27 officers injured.

Southwark and Lambeth Borough Commander, Chief Superintendent Colin Wingrove, said his team had support from the majority of residents, and were responding to a large number of calls from people fed up with loud partying and worried about crowds spreading the virus. “The Met as a whole has a plan in place that is updated on a daily basis,” he said. “We will seize equipment where appropriate.

“Some people comply and some people won’t so we’re using tools like dispersal powers as well.  What happened last Wednesday is completely unacceptable and we are continuing investigating.  We’ve had some really positive messages and support from the community about our officers and their bravery that night.

“We are getting a lot of calls about unlicensed events and we’re responding to what residents need.  Unlicensed music events are a feature of every summer but we are seeing a greater number this year.”

Wingrove says he cannot preempt whether more intelligence-led dispersal orders will be in place over the coming weekend. “We don’t know how it’s going to unfold but we know it’s going to be busier and we’re working hard to have patrols where they need to be,” he explained.

“Our message is a public health one and has always been the same. We are trying to dissuade people from big gatherings. We’re still in a public health crisis and want to save lives.” Avoiding a second wave is a number one priority for Southwark Council leader Peter John as, in his own words, attempting to put a local lockdown in place in our borough would be ‘virtually impossible’.

Leicester’s mayor, Sir Peter Soulsby, was a strong critic of Westminster’s decision to announce a local lockdown on the city despite a lack of clarity over the rationale.

Its council and MPs had no idea what data and information had led to the move until news reports began to circulate in the national press over the weekend.

On Monday, Matt Hancock gave a 9pm address in parliament where the health secretary said R was above one in the city and accounted for ten per cent of all new cases in the last week. But there is still no clear answer about where the outbreak has come from and why it has spread so rapidly. Leicester now has an infection rate three times higher than the second most affected town.

When asked what data Southwark Council has access to that could help shed light on any future waves of the virus, council leader Peter John’s reply was simply: “Not enough”.

He later branded the government’s top-down approach as “absolute lunacy” and said Westminster was failing to bring local authorities on board. “I don’t think we have the granular details that we need and when we do get data from national testing it is quite delayed,” he explained to the News on Tuesday.

“The approach taken to Leicester is that it is not a local decision at all, it is a decision they are expected to support but you can’t have support without having all the information. The question now is what links the outbreak in Leicester and could we find out the same if it occurred in Southwark?  Right now we don’t know and that is completely unacceptable.”

July 4 will see the biggest relaxation in lockdown measures since the crisis began, with pubs reopening and many people already scrambling to book holidays abroad and across the UK.

Although Leicester appears to be an anomaly for now, there are many more areas where new infections are now rising; including fifteen London boroughs.  So far, Southwark is not one of them.

While supporting the semi-return to normality, and boost to the local economy the relaxation brings, Cllr John’s fear is that any second lockdown would be set up to fail due to the information bottleneck. “It would be virtually impossible to enforce as all our policing is by consent.  As the London Riots showed in 2011, if enough people are anarchic then police will be overwhelmed,” he said.

“This is why it is so important that councils and police have the information they need to explain why decisions are being taken in everyone’s best interests.

“If we only have half the story or half the information then it becomes impossible for the mayor in Leicester or a council leader in London to become the mouthpiece for a lockdown.  It is absolute lunacy and it should have – and could have – been avoided.”

In Bermondsey, one trader is appealing for Beer Mile businesses to stay closed – saying lack of toilets and small spaces risk a largely ‘out-of-town’ clientele spreading the virus.

In an open letter, Ben Duckworth, the founder of Affinity Brewing on Bermondsey’s Almond Road, wrote: “I’ve never experienced anything like the highs and lows of the last three months and I know full well that we’re nowhere near out of the woods yet and things may get worse before they get better.

“But being part of the hell that is going to befall the licensed premises of this country next weekend is going to do much more harm than good. We’re simply not ready.”