Her doting mum said: "Our lives have been so hard with her in so much pain, especially for her, so this is a chance that she can live a good and happy life" 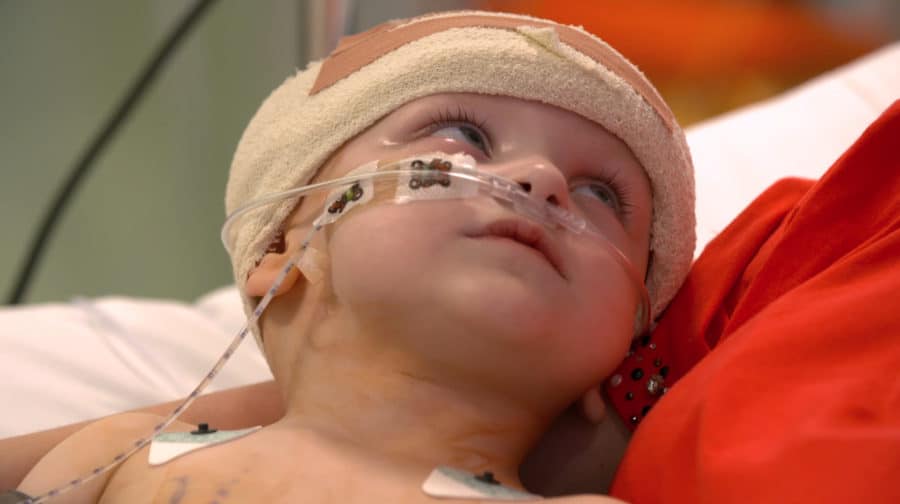 A two-year-old girl at the Evelina Children’s Hospital has become the youngest in the world to undergo deep brain stimulation to treat severe and painful muscle movements.

At its worst, the condition meant the tot’s arms and legs would flail out and her mouth would twitch – preventing her from eating and affecting her breathing.

She was eventually diagnosed with a rare gene mutation and referred to specialists at Evelina who recommended Deep Brain Stimulation.

It involves electrodes being implanted into deep areas of the brain, and is known to be successful in older children.

But at the time of the operation, Viktoria was just two years and eight months old – believed to be the youngest in the world for the procedure.

Her parents Martinas and Patrycja, from Glasgow, hope that the operation is a step towards an end to the pain and suffering for their daughter and a better quality of life for the whole family. Doting mum Patrycja said: “I am so happy for my daughter and I hope the stimulation works.

“Our lives have been so hard with her in so much pain, especially for her, so this is a chance that she can live a good and happy life.”

The state-of-the-art procedure took over four hours and was carried out with by professionals from both the Evelina and King’s College Hospital.

Dr Jean Pierre Lin, a consultant paediatric neurologist at the Evelina, said: “Viktoria’s uncontrolled and violent movement meant she was in real pain which is extremely upsetting for her parents.

“Deep brain stimulation has been proven in adults and older children to change the course of these conditions, often very dramatically. But the challenge was to deliver this in much younger children.

“With this procedure, we’ve created real momentum to begin to explore how children respond to this surgical process as the brain is being formed at an early age.” Richard Selway, a consultant neurosurgeon at King’s College Hospital, said the world-first operation on the two-year-old required thinking about how children’s brains are different from those of adults.

“This opens up a whole series of difficulties with the surgery and these are simple things that we don’t need to think about in adult neurology,” he said.

“Questions such as does the adult-sized equipment work with someone so small? Is the child’s skull thick enough? Will the implant fit inside the body?”

The Evelina London Children’s Hospital is celebrating its 150th anniversary this year, having been set up in 1869 by Baron Ferdinand de Rothschild, whose wife and baby died in childbirth.