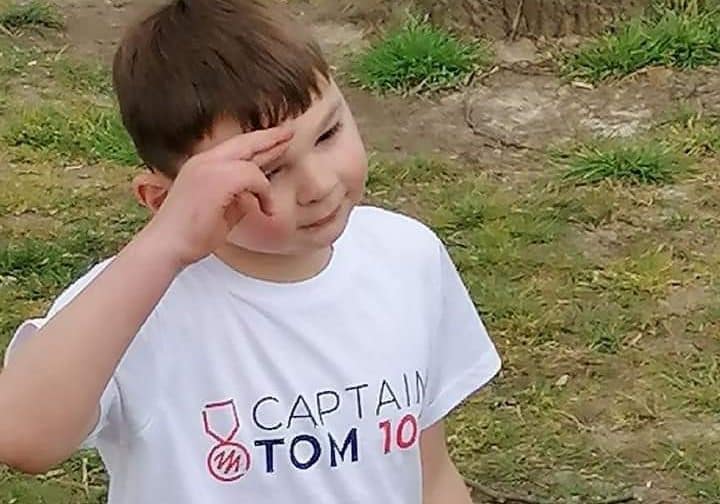 A little boy who raised more than £1.5 million for Evelina London Children’s Hospital has taken part in a fundraising challenge in honour of Captain Sir Tom Moore.

Tony Hudgell, who had to have both legs amputated after being physically abused by his birth parents at just a few weeks old, has raised another £76,500 after walking more than 500 steps without crutches.

Doctors and nurses at Evelina London Children’s Hospital have cared for Tony since he was a baby. Tony miraculously survived multiple fractures, dislocations, blunt trauma, multi-organ failure, toxic shock and sepsis as a baby – with medics saying he was seconds away from death.

We reported last year on his first fundraising walk, where he set the challenge of walking ten kilometres in his new prosthetic legs throughout June, with the support of his adoptive parents.

This time Tony, now aged six, took part in the Captain Tom 100 challenge, after the family of the legendary NHS fundraiser asked people to set themselves charity challenges based around the number 100 between Friday April 30 and Monday May 3.

Tony’s original task was to walk 100 steps without crutches – but he smashed through this and walked the distance five times over.

Tony’s adoptive mum Paula said: “We’re so proud of Tony for once again beating the odds and taking more than 500 steps without his crutches.

“He’s such a determined little boy so we had no doubt he would be able to do this. It means so much more that he’s been able to do it while celebrating the life of Captain Tom, who inspired him to take on his first walking challenge.” 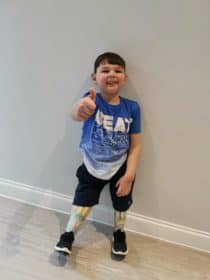 In October last year, Tony received some specially designed prosthetic legs from Guy’s and St Thomas’ prosthetics service. With his new legs, Tony is 5cm taller and should have better mobility.

Paula, 52, said: “Since his fundraising last year, Tony’s confidence has improved so much. He’s always been a lovely, cheeky little boy, but now he’s even more outgoing and self-assured.”

Tony’s prosthetist Andreia Paulo said: “We’re all so pleased to see that Tony has done so well with his new challenge. He is such an inspiration and the whole team here are all so proud of him. There’s no stopping him, so we can’t wait to see what he’s going to do next.” 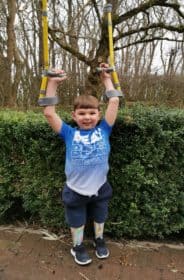 Tony won a Pride of Britain award last year for his incredible efforts.

You can still donate to Tony’s Captain Tom 100 fundraising by visiting: www.justgiving.com/fundraising/tonyhudgell-100stepsunaided-captainsirtom100challenge