Tony Hudgell: Five-year-old raises over £400,000 half way through his 10k walk for Evelina London

"I can remember before your operations how nervous you were, but look at you now' - Cat Flanagan, one of the nurses who cared for Tony 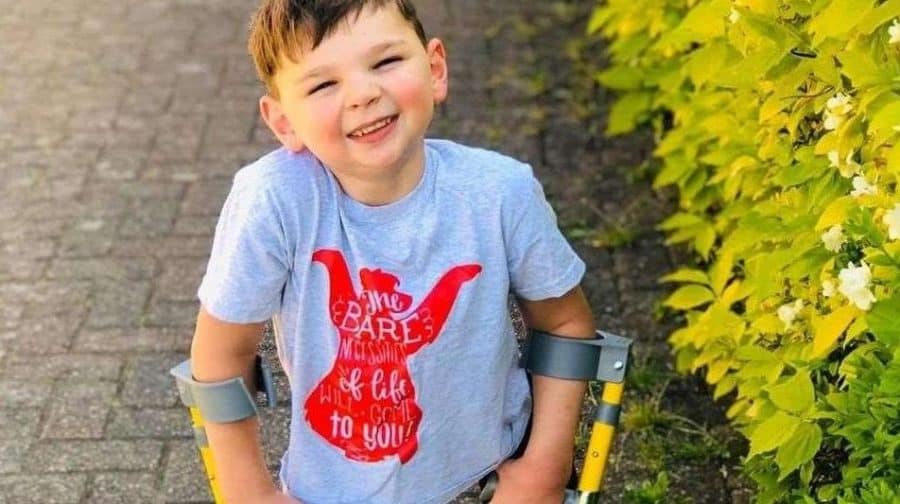 Tony Hudgell, who lives in Kent with his adoptive family

A little boy who had to have both legs amputated after suffering horrific abuse at the hands of his biological parents has now raised over £400,000 for the hospital that saved his life.

As the News reported last week, five-year-old Tony Hudgell has set himself the challenge of walking ten kilometres throughout June as he learns to use his new crutches and prosthetic legs.

Tony, who lives in Kent with his adoptive family, was on life-support at Evelina London when he was just weeks old and continues to receive care from the children’s hospital.

He has now walked more than five kilometres and celebrated reaching this milestone with a very special cake sent from Evelina.

A wondeful surprise after the walk from @EvelinaLondon to congratulate him on half way there with the biggest yummy cake I have ever seen ?
#GoTonyGo#10kwalk#Tonyslaw#doubleamputee https://t.co/YNAlMMZZNw pic.twitter.com/bCrt2ch80r

Medics who cared for Tony during his recovery have also sent messages of support. Consultant Mr Kokkinakis said: “Your commitment and discipline and challenging target inspires us all.”

And Ms Flanagan, a nurse who cared for him when he underwent his amputations, told him: “I can remember before your operations how nervous you were, but look at you now.

“Walking so well and growing up so fast.  Thank you for everything you’re doing for us.  We’re all so proud of you.”

Tony’s fundraising total currently stands at £448,991 (as of Monday, June 15) and his efforts have even been recognised by the England football team – with his walk featuring in their new Lionhearts campaign.

This summer, it’s our turn to celebrate you.

An England team like no other. A squad of #Lionhearts. pic.twitter.com/KhM5WwQaaZ

Southwark NewsNewsTony Hudgell: Five-year-old raises over £400,000 half way through his 10k walk for Evelina London