Water was sprayed on the bridge during yesterday's sizzling heatwave - otherwise it would have jammed shut, sparking commuter chaos 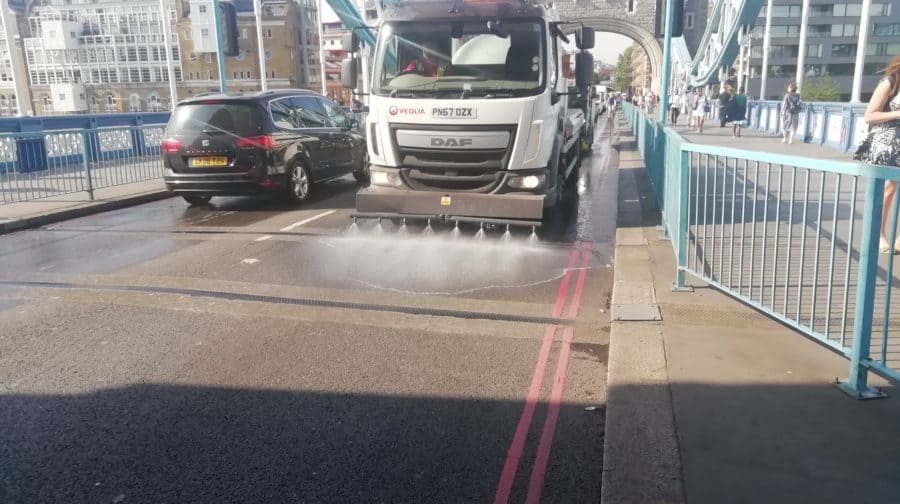 Tower Bridge had to be manually cooled down during the sizzling heatwave yesterday – because the heat could have forced it to jam shut.

The extreme temperatures of over 36c saw the two sides of the Bridge expand, leading to fears that the 15mm gap separating them would disappear.

Without the gap the bridge – which carries around ten thousand vehicles across the Thames daily – would have been unable to open for its four scheduled lifts a day, sparking commuter chaos.

Jeremy Simons, Chair of the City of London Corporation’s Port Heath and Environmental Services Committee, said: “On a day of such extreme heat, we’re playing our part in ensuring that London stays on the move, including at iconic locations like Tower Bridge.

“With the help of a state-of-the-art sweeping and cleaning fleet, our staff have been working around the clock to minimise disruption, while ensuring there is minimal impact on the environment.”

Teams of street sweepers sprayed cold water on the bridge an hour before each lift to prevent heat expansion and to keep the traffic flowing.

It comes after a daredevil climber on Wednesday was spotted by an Australian tourist scaling the bridge’s iconic blue sides, supposedly to take a selfie.