Tower Bridge: Police car smashes into railings in ‘accident’ despite not responding to emergency call 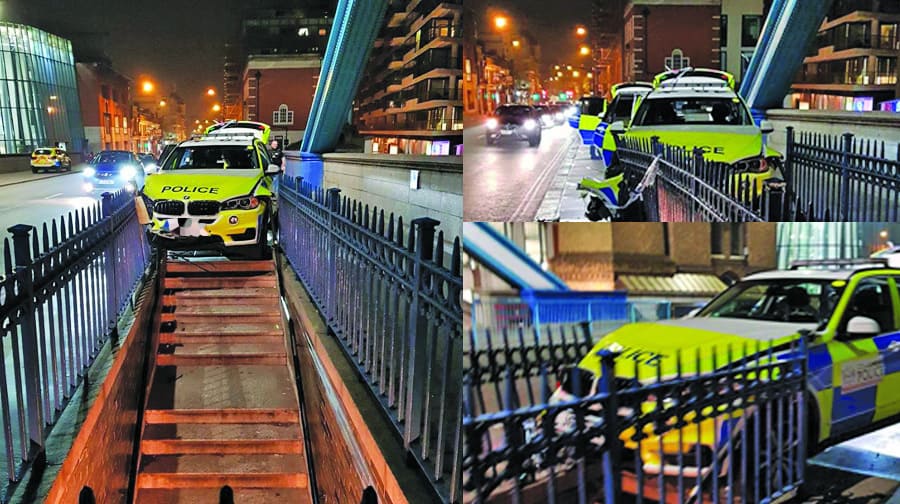 The copper crashed his car on Saturday morning - but police refused to say how ti happened (Images: Niaz Chowdhury)

A City of London police car smashed into the railings on Tower Bridge in an “accident” in the early hours of Saturday morning – despite not pursuing anyone or responding to an emergency call at the time.

No-one was injured during the Tower Bridge collision, City of London police have told the News, which happened shortly before 2am.

Pictures taken at the scene show the wheel arch of the police car torn off and the railings of the footpath bent out of shape.

An eyewitness said: “There were two more armed response vehicle present there, behind the crashed one, and around six, seven police officers were transferring equipment from the crashed vehicle to the one behind.

“I asked one of the officer whether they were chasing anyone, he replied ‘no, just an accident’.

“The foot bridge leading to Thames path was also cordoned off. I did notice the officers were in a relaxed mode, and one or two of them were joking between themselves about the crash.

“So I reckon it must have been just an accident after all.”

A City of London spokesperson confirmed that an “accident” took place involving one of their officers.

However, police declined to go into further detail about how the accident happened, despite there being no police chase or emergency.

“We can confirm the vehicle involved in this accident was not in pursuit of any other vehicle at the time of the crash, nor was it responding to an emergency call,” the spokesperson said.

“There were no injuries.”

Southwark NewsNewsTower Bridge: Police car smashes into railings in ‘accident’ despite not responding to emergency call