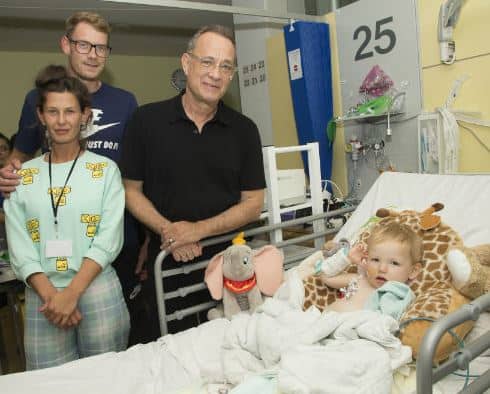 Tom Hanks, pictured with 16-month-old Roman, who is being treated at the hospital (Image: Evelina London Children's Hospital)

Hollywood legend Tom Hanks met children at the Evelina London on Monday for a special pre-release screening of Toy Story 4.

The Oscar-winning actor, who voices Woody in the hit franchise, joined patients and families for face painting and balloon making – and even made a trip to one of the hospital’s wards to meet children unable to attend the screening.

Sixteen-month-old Roman Stacey, who is being treated for kidney failure at the hospital’s Beach ward, was among the children who met Hanks.

His dad, Leon, 32, said: “Meeting Tom Hanks was amazing. He was really down to earth and was very interested in Roman’s care.

“I think it’s brilliant that he gave up his time to visit patients. I’m a huge fan of his films. His visit has really made our day.” The hospital is part of the Guy’s and St Thomas’ Trust, which was the first to have a ‘Medicinema’ – an onsite cinema showing movies to patients.

Marian Ridley, director at Evelina, said: “We were absolutely delighted to welcome Tom Hanks to our hospital as we celebrate our 150th anniversary.

“His visit will have helped lift our patients’ spirits and add some fun to their stay.”

The star made the visit as Disney is a long-time contributor to the Guy’s and St Thomas’ charity.

“Both Tom and the Toy Story films have been a big part of people’s lives over the years and I know this is a moment that both the children and their parents will treasure,” said Steve Crump, chief executive of Medicinema.

“Many patients find life in hospital hard, so spending a precious few hours watching this uplifting film, as well as meeting the voice behind Woody, will make a real difference to their stay.

“We cannot thank Disney enough for making this happen for our patients and Tom for coming and making the screening a truly magical experience.”