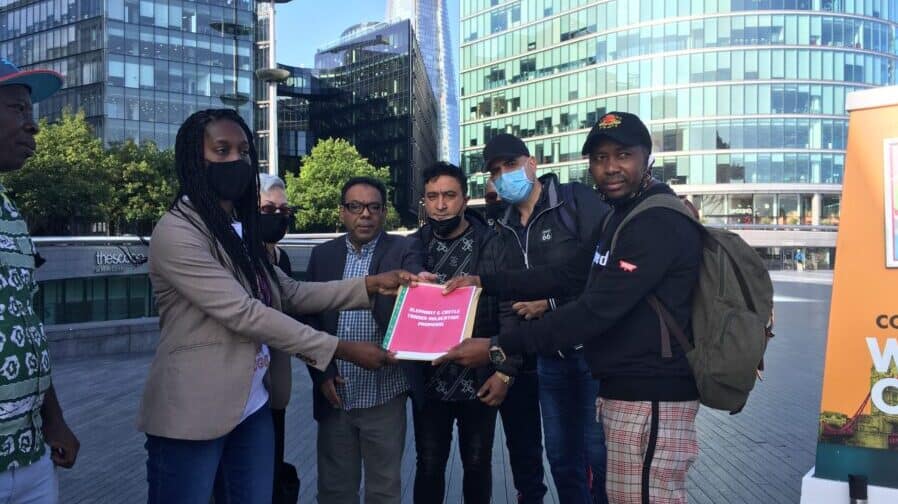 Southwark assembly member Florence Eshalomi is handed a petition by traders from Elephant and Castle.

Traders left with nowhere to go when Elephant and Castle centre closes its doors for good have submitted eleventh-hour plans for new market stalls to be set up nearby, in the hope it will save their businesses.

As the News reported last week, developer Delancey and campaigners are still locked in a bitter dispute over support for traders.

Up the Elephant claims around 40 business owners will be expelled from the shopping centre having not been given adequate support.

Delancey claims all ‘qualifying’ businesses have been relocated already, or offered relocation options that they have turned down.

A joint statement issued by Delancey and Southwark Council described the campaigners’ figures as ‘misinformation’.

Delancey says 79 independent traders qualified for the relocation programme, and 64 applications received were ‘valid’. Forty of these have been relocated.

It says the remaining eighteen traders include those which had multiple locations across the centre, and five that had either moved outside the area or closed ‘of their own accord’. Some traders are also sub-letting from others.

Delancey says that taking these into account, it leaves eight market traders and two kiosk owners who are still without new stalls or premises.

If they are unable to secure a new lease elsewhere they will be given £8,000 each from the relocation fund.

Latin Elephant says its own research showed as of 2018 around 130 traders were operating within the shopping centre and in its outdoor market.

Not all of them were eligible for support due to where they fell in relation to the ‘red line’ of the development.

The group, which has profiled those turned down for new premises or unable to find appropriate space, has now issued an angry rebuttal to Delancey’s claims, arguing: “Our research has been widely documented, and it was carried out independently with an effort to enforce transparency and accountability.

“This has been discussed several times with Southwark Council and Delancey.

“It is unacceptable to see the closure of the Shopping Centre with many traders still without relocation, so we will continue our advocacy work in a constructive way to support the local community.”

Jerry Flynn, on behalf of Up the Elephant, described the relocation options given to businesses as ‘hopelessly inadequate’ and dismissed the £8,000 payment as “nothing like what is needed to re-establish a business built up over many years and little compensation for the loss of a livelihood.”

A group of stall holders are now lobbying for a new market stalls to be added to the area including by the Faraday Memorial, the railway arches by Archer Street, the new Elephant Arcade and at the bottom of Perronet House; including on TfL and The Arch Company owned land.

In a letter to Sadiq Khan sent on August 17, the independent traders wrote: “We are currently in a desperate situation.

“Many of us have worked in the Elephant and Castle for over fifteen years, and have built up a local customer base upon which our businesses depend.

“Many of us are an older demographic, with limited employment opportunities, and families to support.”

Southwark Lib Dem leader Nick Johnson was one of those to reject Delancey’s application at the planning committee in 2018, two years and three deferrals after proposals were first submitted.

“Many of these traders are micro businesses and can’t afford increased rents in the new schemes,” he said.

“When gathered together they form a clear community and place that people knew they could come for authentic Latin American and other ethnicity products and food.

“Now they are dispersed and a community destroyed.”

Councillor Maria Linforth-Hall has given hands-on support to many businesses affected by the regeneration, most recently helping Maritza Medina Sierra, from Colombia relocate her beauty salon to a new home in St George’s Road.

She said she is ‘wholeheartedly’ in favour of the traders’ proposal.

“For these traders, demolishing the centre will take away their livelihood, their savings and their dreams,” she said.

“Many are my dear friends and are currently all under one roof, and will now have to disperse across London to find new homes.” A petition was handed to City Hall last Friday, September 18, to Eshalomi, who has now asked the mayor to intervene, telling this paper: “The Latin American business community is part of the fabric of our local area, and we all want to see that continue.

“With many traders still at risk of losing their livelihoods – in the middle of a pandemic – it’s important we explore all feasible options of support.”

The three billion pound scheme was given the green light by Sadiq Khan in December 2018. Campaigners hoped the mayor would call in the scheme and, as the News has reported, have launched successive legal challenges in the hope of improving the social housing offer.

Although the closure was postponed by several months due to the COVID-19 pandemic, the extra time appears to have done little to reach a rapprochement between the developer and campaigners.

A socially distanced protest will be held at 5pm on the roundabout on today, with Up the Elephant and its coalition of supporters promising they won’t give up their fight.

Alongside retail, the regeneration comprises of a new London College of Communication campus, 979 new ‘build to rent homes’ – of which 116 will be at social rent – a new ticket hall for the northern line and is said to be critical for the long-hoped-for Bakerloo line extension.

There is still an ongoing crowd justice campaign against this redevelopment set up by Jerry Flynn which has raised over 3,000 pounds.
https://t.co/0TG8Y7z9Hx?amp=1

With our current coronavirus pandemic Delancey’s housing scheme is not now viable in either economic or social terms. We have enough tower blocks in this area already and covid-19 spreads more quickly amongst people who live within high density housing as well.