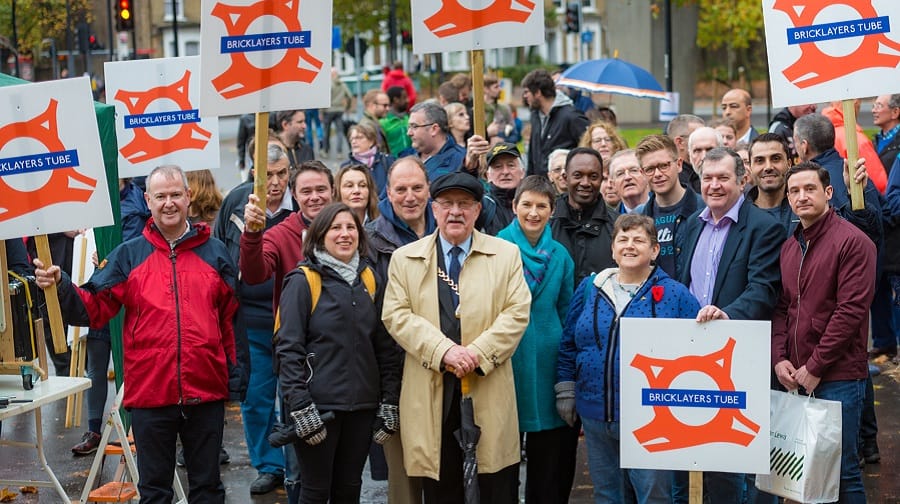 A Tube station could be built at the Bricklayers Arms, transport bosses have confirmed.

Transport for London (TfL) has confirmed it is considering the roundabout as a potential site for a station as part of the Bakerloo Line extension.

If a station is built at the site, it will be the third new station in addition to two others already proposed for the Old Kent Road.

In its initial response to issues raised in a public consultation on the extension, TfL said it was working with the council to “reassess the case [for a station at Bricklayers Arms] based on the new proposals in the draft Old Kent Road Area Action Plan”.

It will be seen as a step in the right direction for campaigners, who have fought for a third station to be built at the site instead of just the 25 metre-high ventilation shaft proposed in the £3billion extension plans.

TfL received a petition with 674 signatures in support of the Bricklayers Arms station from Southwark Liberal Democrats and another with 2,214 names from Tower Bridge Road Alliance.

Bermondsey Street Area Partnership and Bricklayers Arms Tenants’ and Residents’ Association were also involved in organising a rally with the groups back in November.

Suhel Ahmed, chair of Tower Bridge Road Alliance and owner of restaurant Tower Tandoori, told the News: “I think it’s really positive that TfL are now considering the Bricklayers Arms as a site but it should have been an actual option in our option.

“I hope TfL and the Mayor of London will see this would bring a huge amount of benefit to the area despite the cost.

“However, we are still uncertain in terms of what’s going to happen next and whether the Bricklayers Arms will be in the next consultation.”

Cllr Damian O’Brien, Southwark Liberal Democrats transport spokesperson, said: “We are very pleased that TfL have acknowledged there is strong local support for a Bakerloo Line extension station at the Bricklayers Arms and we welcome their positive comments in the latest report.”

Caroline Pidgeon, Lib Dem member on the London Assembly, added: “In the last two years TfL has gone from making up excuses to oppose a Tube station at Bricklayers Arms to agreeing to properly examine the case for a station.”

TfL is proposing to extend the Bakerloo Line beyond Elephant & Castle to Lewisham, serving Old Kent Road and New Cross Gate. The aim is to create a direct link into central London for people living or working in southeast London, especially along the Old Kent Road.

TfL has previously proposed building two stations on the Old Kent Road. If a third station is built at the Bricklayers Arms, the location of the other two stations would be reassessed to make sure they are evenly spaced.

In its latest draft of the Old Kent Road area action plan, Southwark Council said it was “committed to a third station at Bricklayers Arms” and would “carry out further master planning once the station locations are confirmed”.

If a decision is made to go forward with the extension, and the funding needed is secured, construction could start in 2023 with services running by about 2028/29.