The court heard “Whilst Rocky Djelal was one of a number of people arrested for that murder, he was subsequently released without charge, and no one was ever prosecuted'

In the opening of the trial into the murder of Rocky Djelal, stabbed to death two years ago beside a children’s playground in Southwark Park, the court was told his alleged killer disguised himself as a builder, intent on ‘revenge’ for the unsolved murder of his brother.

Stephen O’Rourke, 48, allegedly knifed 38-year-old Rocky Djelal to death in a ‘savage’ attack on Halloween in 2018.

O’Rourke blamed the victim for the killing of his brother Michael (also known as Paddy) O’Rourke, 21, in 2000, and grew increasingly paranoid that the culprit was after him next, it was said.

The Old Bailey heard that the pair had grown up together in Bermondsey and their families had known one another all their lives.

Mr Djelal was arrested but released without charge and no one was ever prosecuted over Michael’s murder on 20 August 2000, the Old Bailey heard.

On the anniversary of Michael’s funeral, the victim was chatting on the phone to his girlfriend near the park swings when he was ambushed from behind by O’Rourke, jurors heard.

The accused killer donned a high-vis jacket, paint-splashed trousers and labourer’s boots to blend in with builders working near the park cafe and ‘surprise’ the victim, the court heard.

At around 1.58pm, he stabbed Mr Djelal twice, before plunging the blade 11cm into his back, causing his lung to collapse, it was said.

Witnesses initially thought they had heard a wild bird when the victim’s screams echoed through the park during the ‘clinically savage, pre-planned, execution-style killing,’ prosecutors claim.

Prosecutor Allison Hunter, QC, told jurors the vicious killing was intended to ‘wreak revenge’ for his brother and save himself from the perceived ongoing threat.

Bearded O’Rourke appeared in the dock wearing glasses and a dark grey suit while the victim’s family wept silently in the well of the court. 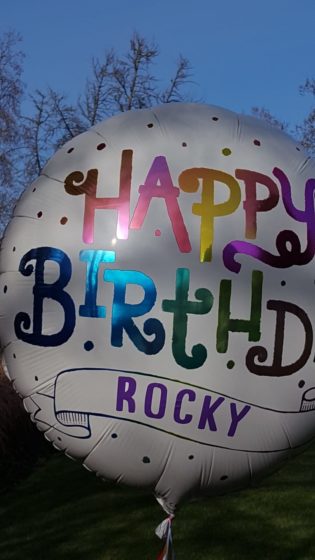 “As the sun was shining and children were playing on swings, Rocky Djelal was chatting on the telephone and looking on as he waited for his girlfriend Elle Carter to come back from her mother’s and join him in the park.

“Stephen O’Rourke had spent the last hour and a half following Rocky Djelal almost in his very footsteps.

“When he located him, with the advantage of surprise, looking for all the world like one of the workmen working nearby… he calmly, coldly and deliberately walked up to Rocky Djelal and stabbed him in what can only be described, the crown say, as a clinically savage, pre-planned, execution-style killing.

“Witnesses describe hearing a shriek coming from nearby as if from a sort of wild bird, which is precisely what one thought he was hearing until he saw the arms of another person flailing on the ground.

“Stephen O’Rourke knew Rocky Djelal well. Not only had their families known each other all their lives and had lived near to each other when the children were all growing up, but eighteen years previously on 20 August 2000 Michael O’Rourke, brother to Stephen, Jason and Caroline O’Rourke was also murdered.

“Whilst Rocky Djelal was one of a number of people arrested for that murder, he was subsequently released without charge, and no one was ever prosecuted.

“It is clear however, that Stephen O’Rourke at least and his siblings continued to believe he was one of those responsible.”

Jurors heard O’Rourke enlisted his 34-year-old brother Jason, aka ‘Biggie,’ to assist in the killing and hide the blood-stained clothes after the execution.

The sibling was initially arrested alongside O’Rourke but killed himself while awaiting trial, the court heard.

Ms Hunter went on: “Messages recovered from Stephen O’Rourke’s regular telephone after his arrest reveal that from late August 2018, he had been particularly preoccupied with his brother’s murder and those that had killed him.

“He was convinced that his brother’s killers were ‘messing with his head’ … And that they were now mocking and targeting him.

“His conviction that it was his brother’s killers that were after him led him to try to re-establish contact with his other brother, Jason O’Rourke, with whom you will hear he had not spoken for a number of years.

“Just four days before he murdered Rocky Djelal, Stephen O’Rourke and Jason O’Rourke aka “Biggie” had made contact with each other.

“As the evidence will reveal, it was Jason O’Rourke who collected the no doubt bloodied clothes Stephen O’Rourke wore during the commission of the murder.” 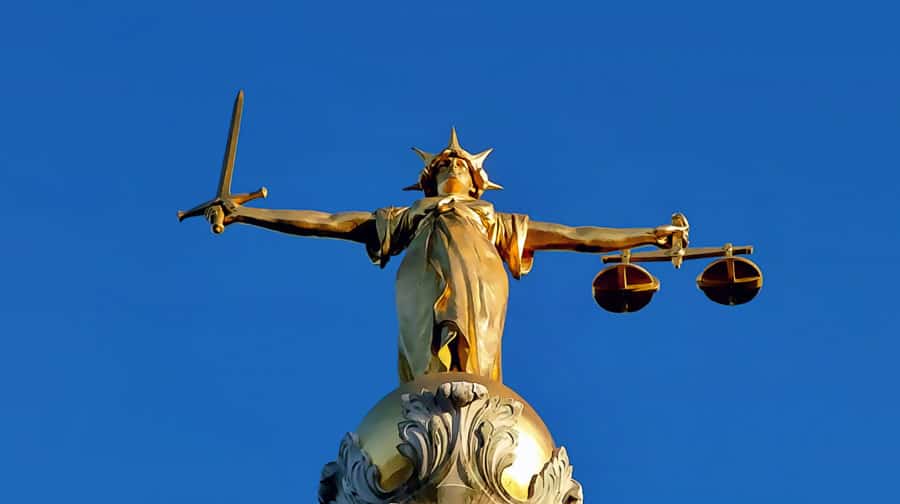 The court was told O’Rourke allegedly selected a kitchen knife from a ‘grisly collection’ of weapons he hoarded in his bedroom and set out to execute the ‘carefully planned’ attack.

The accused knifeman scoped out a CCTV blind spot near the children’s playground where he pounced on Mr Djelal in the ‘military-style’ killing, it was said.

The prosecutor said: “There were construction works taking place in the park right next to the café and children’s playground where Rocky Djelal was murdered. Unsurprisingly workers on the site as part of their work attire, wore hi-vis jackets and vests.

“31 October was a significant date in the O’Rourke family calendar. It was the anniversary of Paddy O’Rourke’s funeral.

“On this 31 October 2018, some eighteen years after Paddy had been killed, Stephen O’Rourke had dressed himself as a labourer: in boots, dark paint-splashed trousers, a hoodie and a high-vis jacket when he set off in search of his prey.

“No doubt say the crown that he intended his attire to be something of a disguise, not least to Rocky Djelal, allowing him to pass himself off as a labourer in whom no-one would be interested as he carried out his deliberate and carefully planned attack.

“So carefully and thoroughly had he planned for his actions that morning, that he took with him a change of clothing.

“He also took with him a knife, no doubt, say the crown, from the grisly collection he kept in his bedroom.

“Stephen O’Rourke had packed his murder kit in two Tesco carrier bags for life that he can be seen carrying on recovered CCTV footage from his route, as he strode purposefully through the streets of Bermondsey from his home address in Grosvenor Park towards and around Southwark Park.

“Minutes before the murder, Stephen O’Rourke left the park through the Gomm Road gate, but CCTV shows him to quite literally turn on his heel and retrace his steps through the same entrance of the park through which he had left, from where he walks purposefully and directly to where we now know Rocky Djelal to have been standing on a little stretch of pathway just out of sight of the camera.

“[After] O’Rourke disappears out of the view of the camera, Rocky Djelal can be seen stumbling back into view on the other side of the stretch of pathway… by which time he had been fatally stabbed.

“He can be seen running, then stumbling and collapsing over the fence into the children’s play area.” 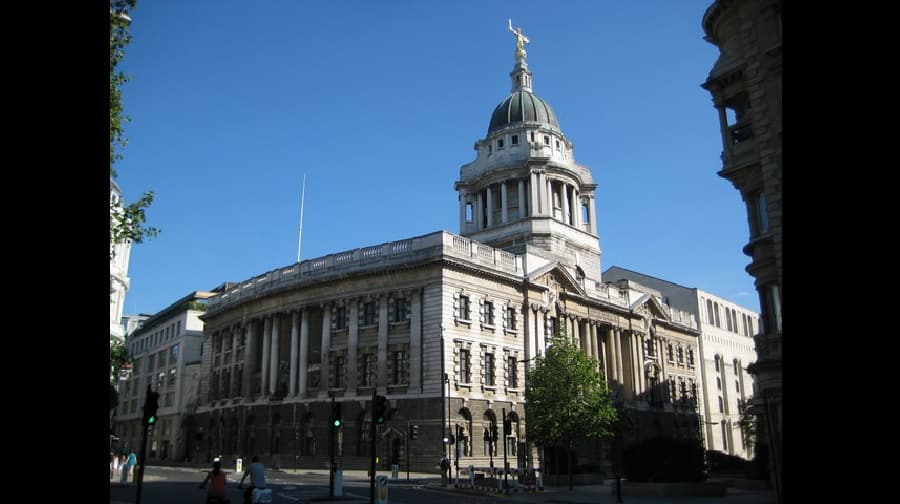 The prosecutor said Mr Djelal had fought for his life by raising his hands defensively, but “so deeply does the knife go in that it chips a notch out of the bone of his left forearm.”

Emergency services including a helicopter arrived at the scene and battled to save the victim’s life, but despite their best efforts he was pronounced dead at 2.30pm.

As police arrived, witness Tom Walker who was walking nearby saw Mr Djelal’s heartbroken father running towards his son’s body calling out: “Where’s my boy?,” it was said.

A nanny was taking a baby for a stroll nearby when she watched O’Rourke flee the scene with a chilling ‘ironic smile’ on his face, the court heard.

“As he turned towards Gomm Road she saw that he had what she described chillingly as an ironic smile on his face,” the prosecutor said.

O’Rourke allegedly became convinced his brother’s killers were linked to a building company called Nordic Construction who had been messaging him as he hunted for a job.

The accused killer messaged his girlfriend about the perceived threats, dubbing them ‘plastic gangster c**ts’ who he would ‘f**k up the next chance he gets,’ jurors were told.

Stacey Browne described her lover as ‘running around like Rambo’ after the flurry of paranoid texts on 27 October – just four days before the alleged murder, the court heard.

Ms Hunter added: “It is clear, say the Crown, that Stephen O’Rourke had sought the assistance of his brother to help him wreak revenge upon the person he believed was their brother’s killer, and remove the threat he had going on in his head about being targeted by his brother’s killers from all those years ago.”

The prosecutor told jurors it has been suggested that O’Rourke would claim he acted in ‘self-defence.’