“She pushed boundaries. She was crazy. She would put her mind to anything without thinking about how to follow it though. In an entrepreneurial way, she had vision and she just went for it, irrespective of what opposition there was, and she ended up delivering some amazing projects.” 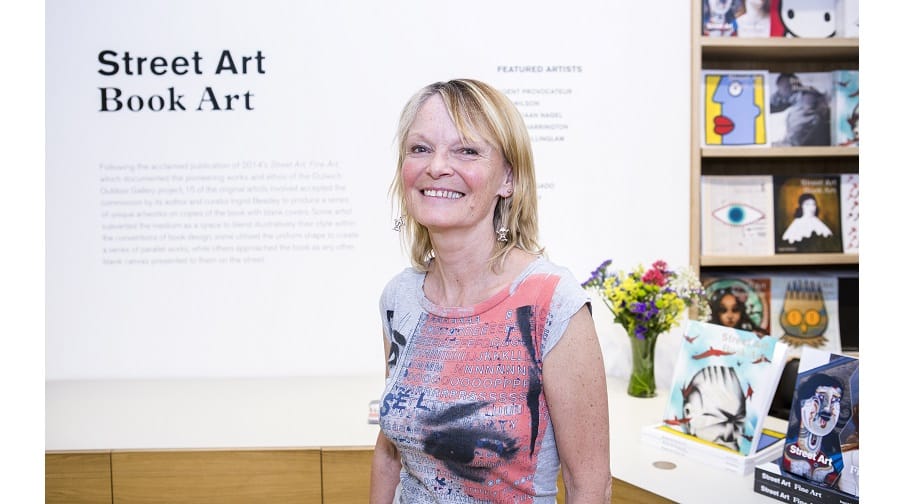 Inspiring, entrepreneurial, and “a force of nature” were just a handful of words used by friends and colleagues of Ingrid Beazley to pay tribute to her.

The Court Lane resident, who volunteered at the Dulwich Picture Gallery’s education department for 20 years, died of cancer on April 21, aged 67.

There are many, obvious tokens by which Ingrid’s contribution to life in Dulwich will be remembered. Most notable were the murals and artworks painted on houses, pubs and blocks around East Dulwich and Peckham Rye, which formed part of her Outdoor Gallery programme.

Ingrid, who was chair of the Friends of Dulwich Picture Gallery from 2005 to 2008, had the idea to bring the Picture Gallery’s classical paintings into the public eye.

In an interview with the Dulwich Society, Ingrid told of her “epiphany” in discovering street art in 2012, having attended a lecture by Hackney artist Stik, whose works can be found in Court Lane, and in the courtyard of Push Studios in Blackwater Road. It was here that her vision for the Dulwich.

In 2014, Ingrid published the book ‘Street Art is Fine Art’, a 252-page collection of fine art works reinterpreted onto buildings.

Mehdi Ghedyanloo’s interpretation of David Tenirs the Younger’s C17th painting ‘A Castle and its Proprietors’, at 15 Kinsale Street

Then in 2015, Kinsale Street in Peckham was chosen for a further instalment of Ingrid’s Street Art project, and a mural of ‘A Castle and Its Properties’ (main picture) was emblazoned on the side of house number fifteen. There are also the startling murals that jump out of the walls of The Lordship pub, The Paxton in Gipsy Gill, and The Victoria Inn in Choumert Road, Peckham.

Ellie Manwell, the Picture Gallery’s head of communications, wrote a touching tribute on its website.

“I could never forget the first time I met Ingrid,” she wrote. “Ingrid was always ahead of the curve, always staying young in her outlook and as such was able to reach people that others could not. It was her passion. Her creation of the Dulwich Outdoor… has left the most inspiring mark on this area. What could be a greater gift than to bring art to our streets?”

Stephen Henden and partner Neil Ellis had been neighbours and friends of Ingrid’s in Court Lane for more than ten years.

Neil, 61, said: “She pushed boundaries. She was crazy. She would put her mind to anything without thinking about how to follow it though. In an entrepreneurial way, she had vision and she just went for it, irrespective of what opposition there was, and she ended up delivering some amazing projects.”

Those projects included the Open House part of Dulwich Festival, in which it became tradition for some 250 artists to open their doors throughout Dulwich and host mini galleries and performing arts events. Each year Open House would kick off on a Friday night with one of Ingrid’s notorious house parties.

“It was a phenomenal success,” Neil said. “Ingrid had huge number of people traipsing into her home to see everything she had on display, and we have done the same about five times. People were wandering the houses in various states of inebriation. It created a really good buzz on the street. You met neighbours you hadn’t met before and it made a really good community bond.”

Then the pop-up art shop in the former Dulwich Village Post Office was launched in 2015, after Ingrid “somehow” earned the enthusiasm of the “usually conservative” Dulwich Estate.

Though by this point Ingrid was “beginning to show signs of being unwell”, Stephen remarked the creeping severity of her cancer could have “encouraged her” and made her “even more determined”.

Another project was the Picture Gallery Film Club – which was again done in the spirit of welcoming new audiences to “break down barriers” between social groups. It has since become well established as the East Dulwich Tavern’s Bigger Picture film club.

Stephen, 50, said: “And you never would’ve seen her name on any of it. Her vision was to promote the Picture Gallery and to bring something special to the area. She never set out to promote herself.

“Even recently she was teaching and volunteering at the gallery. She had a philanthropic spirit and drive you wouldn’t expect of someone in her health.

“One thing that really surprised us about this part of south London was we thought it might be a bit stuffy, but this is one of the friendliest streets, and it’s because of people like Ingrid who create those community networks and bonds.”

Novelist Yang-May Ooi co-founded the community blog Dulwichonview.org.uk with Ingrid in 2008, after meeting her at a party hosted by Neil, and it became a popular place to share and celebrate Dulwich’s arts scene.

As a duo, Yang-May handled the technical side of running the website, while Ingrid “did what she did best” in making friends, socialising and bringing the community together.

Writing for the website, Yang-May’s called Ingrid a “warm-hearted force of nature whose energy and dynamism left a glow with everyone she met”.

Ingrid was the daughter of a doctor whose practice was in Tanzania, and moved to the Surrey town of Haslemere, aged twelve. She studied History at St Andrews University in Scotland, and arrived in London to complete a teaching qualification at Queen Mary University.

During her two decades of the service to the Gallery, she was named ‘Volunteer of the Year’ in the Third Sector Excellence Awards, in 2006. And in 2010 she was made a Fellow of the Royal Society of Arts.

She is survived by her husband Tom Beazley, two daughters and two grandchildren. It is understood that a small, private funeral has been held.

A celebration of Ingrid’s life and achievements is to be held at the Picture Gallery on July 1, at the newly-opened Pavilion.

That’s such sad news. Ingrid was an inspiration to so many people and a really kind human being in every aspect. My thoughts are with her family.