“He was essentially a very modest man. He rarely talked about himself, though he was a great communicator and he could command great respect” 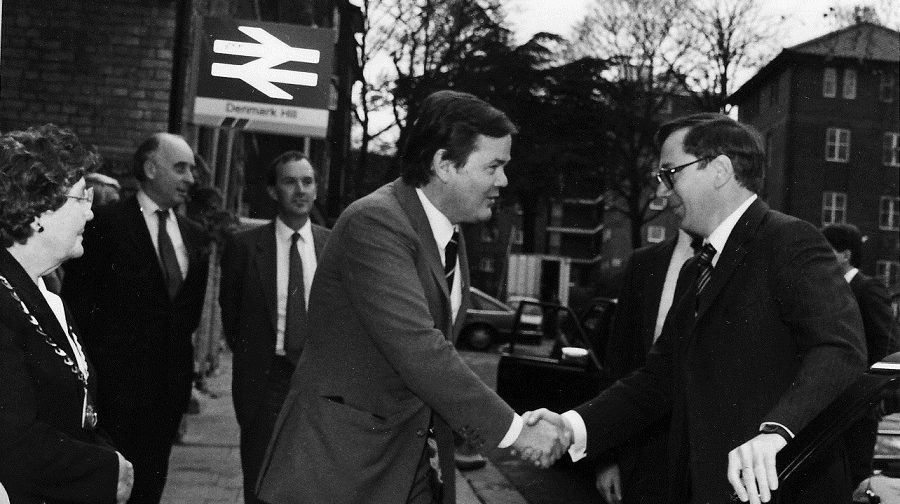 Jeremy Bennett (left) shaking the hand of the Duke of Gloucester (right) at the opening of the Phoenix & Firkin in 1984.

An Emmy Award-winning filmmaker from Camberwell, who was also the driving force behind the transformation of Burgess Park, died on October 20.

Cambridge graduate Jeremy Bennett was chairman of The Camberwell Society for seven years.

The 77-year-old died at King’s College Hospital following a heart operation, though he had suffered from a non-malignant brain tumour for a number of years.

Mr Bennett was credited with sowing the seeds of what became a national federation of charities called Groundwork, which blossomed from a project he originally coined as the Southwark Environmental Trust. The Trust later became Groundwork Southwark in 1995, and Groundwork London, and spread around the country.

There are 160 projects in the borough that are owed to Groundwork Southwark. The most notable was Burgess Park, which life-long Southwark residents will know was once a huge industrial zone, once cut through by the old Surrey Canal.

With Mr Bennett at its helm, Groundwork Southwark worked with Southwark Council to bring the landmark project into fruition, alongside Lawn Tennis Association and Sport England.

Mr Bennett also led a campaign to save Denmark Hill Station, which was threatened with demolition after a fire in the early 1980s. Thanks to his work, British Rail was persuaded to invest in the station, and it reopened in 1984, merged with the Phoenix pub (formally the Phoenix and Firkin).

The Camberwell Society’s new president, Nicholas Roskill from Grove Lane, told the News: “Jeremy had a great social conscience. He wanted to improve the environment, and to a great extent he succeeded.

“He was essentially a very modest man. He rarely talked about himself, though he was a great communicator and he could command great respect.”

All of this work was in addition to Mr Bennett’s day job – as a pioneering documentary maker.

He worked at the BBC for 20 years before establishing his own production company, 3BM TV Ltd, which made films such as: ‘Monty – in love and war’, the four-part series ‘The Complete Churchill’, ‘Hiroshima’ and ‘The Cuban Missile Crisis’, for which he won an Emmy award.

A memorial service for Mr Bennett was held on November 7 at Christ’s Chapel in Dulwich Village. He is survived by his wife of 54 years, Tine, with whom he had three children, and has five grandchildren.