John Mulrenan sadly passed away from lung cancer on December 19 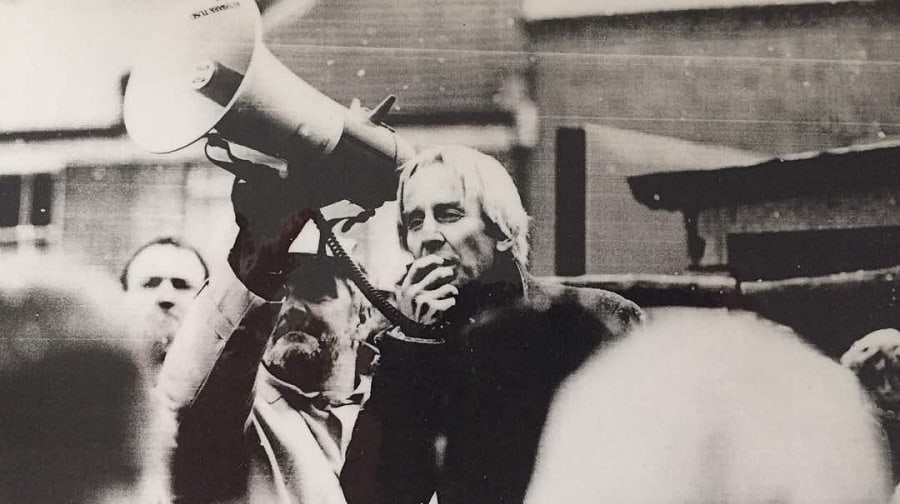 A young John Mulrenan at a political rally

Tributes have been paid to a life-long trade unionist who fought tirelessly against inequality and injustice until his death shortly before Christmas.

John Mulrenan, who grew up in Elephant and Castle, worked for trade unions Southwark Nalgo and Southwark Unison before retiring in the mid 2000s.

During his time as leader of Southwark NALGO in the 1980s, he led a successful council-wide strike over the pay and conditions for residential care workers.

He went on to become branch secretary of Southwark Unison in the ‘90s and spent the last decade of his life training shop stewards for various unions and offering informal employment advice to anyone who needed it.

John was born on August 22, 1954, to Mary Mulrenan, a cleaner, and Michael Mulrenan, a bricklayers labourer, who emigrated to London from Ireland in the ‘40s.

He was the fifth of eight children and grew up in a two-bedroom council flat in Ash Street, which was later demolished to make way for the Heygate Estate.

After leaving school he worked for Barnardo’s for a time before studying at Brighton Polytechnic University and later worked as a librarian in libraries across Southwark.

John Mulrenan at 2010 May Day march

He met his wife Alison Brewer through the Labour Party and the pair married in 1987, before having daughters Claire, now 30, and Rachel, 28.

The couple later divorced but remained close friends until his death in December.

Alison went on to have another daughter, Lauren, 23, to whom John was very close and treated as his own.

Paying tribute to her father, Rachel Mulrenan described him as a “south Londoner through and through” whose passion in life was standing up for others.

“I think the key motivator for my Dad was a hatred for all kinds of inequality and injustice,” said Rachel.

“He was a very principled person and had a strong sense of personal justice. He came from a very working class family and was a champion of workers.

“He also really hated being told what to do so I think he went into a role where he wouldn’t be.”

John Mulrenan with daughters in Ireland in August 2017

Rachel described her dad as having a “great sense of humour” and being laid back in his personal life but organised and principled in his working life.

“He was really devoted to his family and had quite simple tastes,” she said.

“He developed some quite eccentric hobbies later in life; he really enjoyed going to second-hand shops and auctions and enjoyed watching Salvage Hunters.

“He also enjoyed reading and loved local history and politics.

“Music was a big part of my Dad’s life – he came of age in the punk era, and was particularly keen on The Clash, Iggy Pop, The Kinks and The Pogues.

“My Dad was a south Londoner through and through – to the point where he referred to anywhere north of the Thames as ‘the North’.”

Rachel said politics was her father’s passion in life.

“When I was born, my Dad had to leave a picket line to join my Mum at the hospital,” she said.

“He also almost missed the birth of my older sister Claire because he was out campaigning for Labour and he hadn’t got to grips with how to use a pager.”

John was diagnosed with lung cancer in May 2016 and remained optimistic and active until September this year.

He passed away in Lewisham Hospital on December 19, aged 63.

John’s funeral will be held at 3.15pm on Monday, January 8, at Hither Green Crematorium, in Lewisham, SE6 1TP.

John’s wish was for guests to wear informal dress and make donations to Care4Calais (http://care4calais.org/) rather than floral tributes.

Family and friends will gather for drinks after the reception at the Ivy House, in Nunhead.

John’s family has also set up an email address for anyone who wishes to get in touch: john.mulrenan.memorial@gmail.com