Hilda was a frequent sight down Bermondsey's Blue, where she used to get her hair done 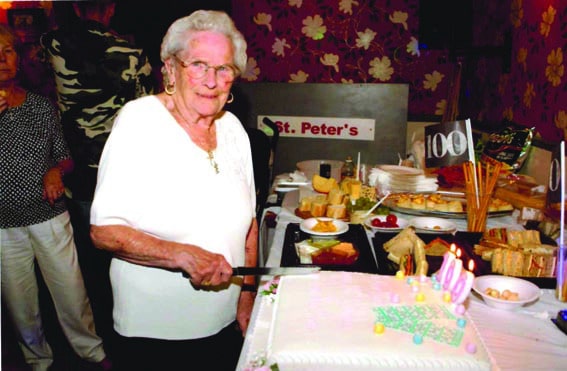 Tributes have poured in from family and friends to the “loveliest and friendliest” Bermondsey lady who has passed away aged 101.

Hilda McCarthy, a former civil servant, was a regular sight down Bermondsey’s Blue. Every week she would go down to Dougal’s hairdressers to get her hair done, pushing along her trolley.

But sometimes she wouldn’t come back for hours, because she enjoyed talking to them so much.

“She used to come back and say, ‘I was there ages, they asked me about the war!’” laughs her next-door-neighbour of 38 years on the Pedworth Estate, Christine Wiszk.

She had always been a sociable and friendly person, two of her sons tell the News. Hilda, pictured with her great grandchildren

When her husband was overseas, “he used to send home his wage packet every week. He said, ‘use it for a deposit for a house in Eltham,” says her son Pat, who now lives in Yorkshire.

“But when he came home she’d bought a piano so that everyone could have a party. And no-one could even play the piano!”

The popular local figure loved darts and good, old-fashioned pie and mash. “She was one of the old school,” says Christine.

“She never had a bad word to say about anybody, she was the friendliest lady.”

Born in August 1917, Hilda lived through some of the biggest events in world history, including both World Wars.

Once, says her son Pat, she went down to the air-raid shelter as a German Doodlebug was flying overhead. The popular Bermondsey lady, pictured with her great-great grandchild, said the secret to long life is porridge and a single scotch at night-time

“She said, she went down with brown hair and came back up completely grey!” he tells the News.

“We moved in at roughly the same time on this estate when it had just been built. My daughter was two years old. She’s 40 now,” Christine told the News.

“Anytime she saw the kids, she used to give them ice lollies over the fence. They called her Nan, she lived there so long.”

Despite being 101 when she passed away in May, the popular great-great-grandmother kept active and fit. She never needed a carer, and would cook, clean and do all of her washing herself.

“You never would’ve guessed she was 101,” both Pat and Christine separately said.

The secret to a healthy old age, she used to tell loved ones, was porridge in the morning – and never more than one single scotch and lemonade of a night-time.

When Hilda’s funeral was held on June 4, the funeral cars had an impromptu procession along the Blue.

As a sign of respect, council workers who knew Hilda went and swept the area before the funeral cars passed.

“So when we drove with cars down there it was nice and clean,” says Pat.