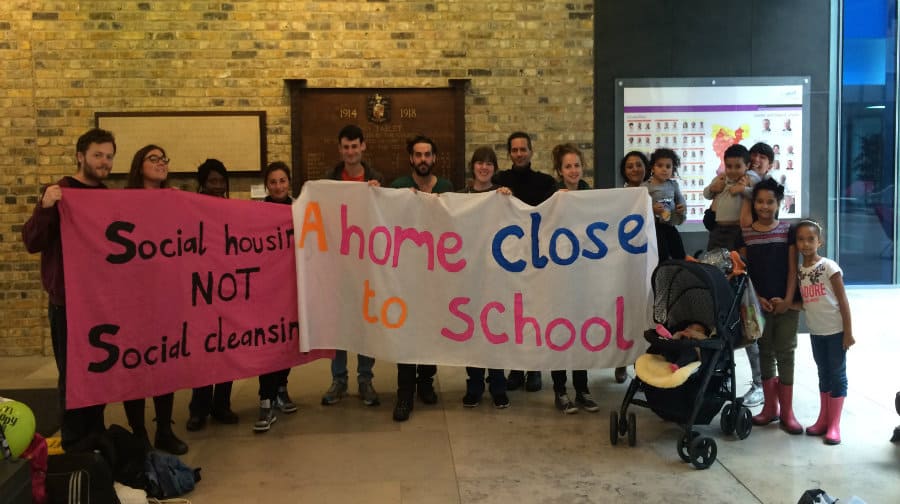 The activists took over the lobby to highlight the plight of a Camberwell mum who had recently been temporarily re-housed by the council to Woolwich – a three-bus journey from her friends, family and children’s school.

While the woman wished to remain anonymous, she was happy for her story to be told to the News by Housing Action Southwark and Lambeth representatives, who organised the protest.

Izzy Koksal explained: “Because she has been moved to Woolwich, she is now forced to spend two hours every morning and afternoon bringing her children to and from school.

“She lost her job because she had to spend so much time going back and forth. Southwark Council are actually pretty good at providing temporary accommodation in the borough and we really hope they continue this by helping this family out.”

By coincidence, council officers were trying to get in touch with the woman as the protest was happening to tell her that they had found her alternative accommodation inside the borough. She has now been placed in a new temporary home in the Aylesbury Estate.

After hearing the news, Izzy said: “We are just overwhelmed and so pleased for her. She was very happy and crying. We all got a bit emotional.

“It really shows the power of the collective – that’s what HASL are trying to do.  It sounds cheesy, but we are so much more powerful if we join together than struggle alone.”

Cllr Richard Livingstone, cabinet member for housing, said: “Southwark Council is facing unprecedented demands on our temporary housing resources as more and more people face homelessness due to the housing crisis. As a result we sometimes have to place people in a nearby borough temporarily while we find more permanent accommodation in Southwark.

“I am pleased to say that in this instance the council was already working on finding [the woman] temporary accommodation back in Southwark before any protest started and we were able to offer her a place back in the borough even as the protest was taking place. We wish her well in the future and will continue to offer what support we can until she finds a permanent new home.”