Lizards found as number of abandoned exotic pets on the rise 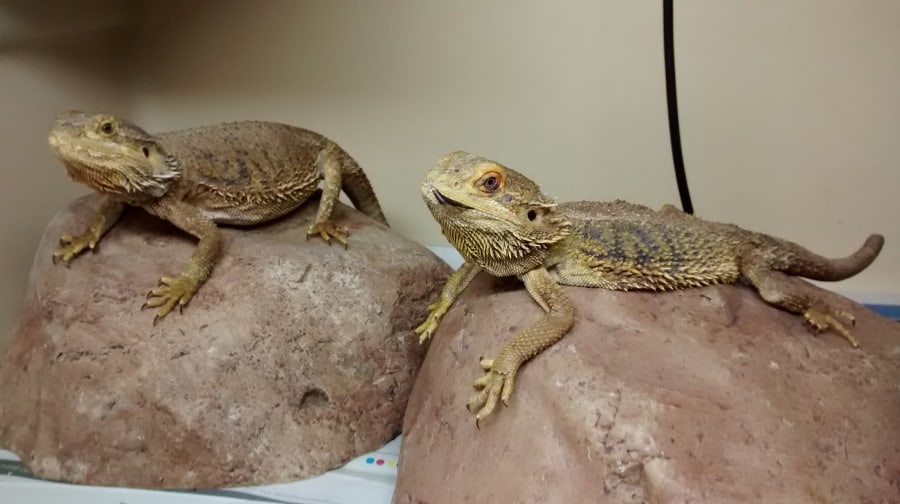 The two bearded dragons found dumped in a Camberwell stairwell

All the fire had gone out of these two bearded dragons, who were left for dead in a Camberwell stairwell last month.

The pair were abandoned on the concrete steps of a block of flats in Lettsome Street, where they were so cold and lifeless when the RSPCA arrived that the inspector thought they had already died.

As bearded dragons are particularly susceptible to temperature, they had to be carefully warmed up by RSPCA inspector and exotics officer, Anthony Pulfer, who said the fact they had been ‘dumped’ there was “unbelievable.”

“They are ectothermic and rely on their environment to maintain their body temperature, so they were lying there lifeless with cold when I got to them. At first I thought they were dead,” he said.

“I managed to warm them up and then give them some food and rehydrate them and they are doing much better now. It is just distressing to find these beautiful animals just dumped and left to die,” he added.

These two lizards are the latest in a worrying trend the RSPCA has noticed in the increased abandoning of exotic pets. In 2014 the charity saw a 27 percent increase from the year before on calls about bearded dragons alone and collected 1,853 reptiles in total, a even percent increase on the previous year.

“Exotic pets, particularly reptiles such as bearded dragons, appear to be increasing in popularity and the number of related incidents dealt with by the RSPCA has risen in recent years,” said Insp Pulfer, who thinks the amount of hard work needed to recreate the animals’ natural habitat is the reason behind the increase.

“The RSPCA is experiencing widespread neglect of exotic animals across the country.  For many people an exotic animal represents too much of a commitment which is manifested in the growing number of exotic animals being abandoned and handed to shelters around the country,” he added. Anyone with information about how the two bearded dragons came to be on the steps in the block of flats is urged to contact the RSPCA Inspectorate Appeal Line on 0300 123 8018.