Elliot Swift, who used to manage the Two Bridges pub, by City Hall, says him and his family are being made homeless over Christmas 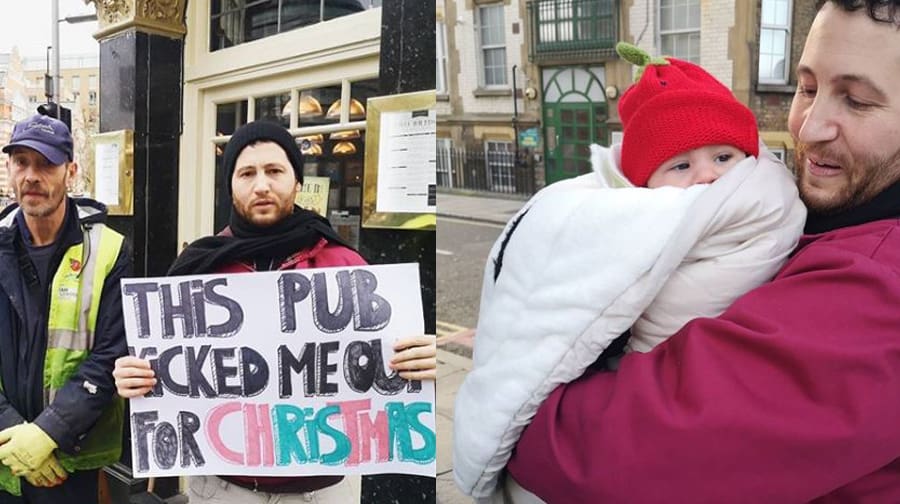 An ex-publican of a popular Bermondsey boozer has started a daily protest outside his own former pub in a bitter employment row, only months after taking up the contract.

Elliot Swift, a former manager of the Two Bridges on Tooley Street, alleges that he was fired without good reason, and is being made homeless on December 17 with his wife and four-month-old baby daughter.

He is now picketing daily outside the popular pub, close to City Hall, with a sign stating: “This pub is making me homeless over Christmas.” He has no plans to stop the protest. Elliot with supporter and his baby

However, Star Pubs and Bars – run by Heineken beers, which ultimately owns the pub – said Mr Swift’s contract was terminated for “non-compliance with its terms and conditions.”

It refused to tell the News what those terms and conditions were, saying the current licensee did not wish to discuss the “intricacies of the company’s break-up in public.”

READ MORE: £400,000 refurb for Tooley Street boozer will see it re-open as the Two Bridges

Mr Swift, originally from New York, had been brought in to take over the management of the pub with a business partner in August.

It was part of a well-publicised £400,000 refurb of the former Bridge Lounge to reopen it as The Two Bridges in September.

“I just want some justice,” said Mr Swift, who lives in the flat above the pub with his wife and his four-month old baby daughter.

He began his protest last Friday, and has publicised it on an Instagram account called ‘Two Bridges to Nowhere.’

“We will be here every day, we’re trying to do three hours a day, to make sure people know the pub is treating me unfairly,” he said. The Two Bridges pub, by City Hall on Tooley Street

Elliot, who is now doing trial shifts at nearby Shipwrights Arms, said the family may not leave the flat above the pub as requested on December 17.

Star Pubs and Bars have given him 28 days to vacate the premises.

Among the reasons for the row is an accusation by Mr Swift that he cannot currently afford to move out, making him and his young family homeless over Christmas.

“We have a good working relationship with one of the directors who is now running the pub under a new contract,” Star Pubs and Bars told the News.

Asked whether the radical step of protesting outside the workplace which he used to manage was unreasonable, Mr Swift said: “A four-month-old baby, a hard-working businessman and his wife are being chucked out onto the street and being treated like garbage.

“What I’m doing doesn’t even hold a candle compared to what’s been done to me.”

“The Two Bridges was operated on a management contract by a limited company, which had two directors,” responded a Star Pubs and Bars spokesperson to detailed questions by the News.

Those two directors of that company were Mr Swift and a former business partner.

“The contract had to be terminated due to non-compliance with its terms and conditions. Repeated warnings were given about this,” the statement said.

“The other director is no longer involved in the pub’s operation and, as a result, was given 28 working days’ notice to vacate the pub’s accommodation.”