The raid happened at around 6am on Friday 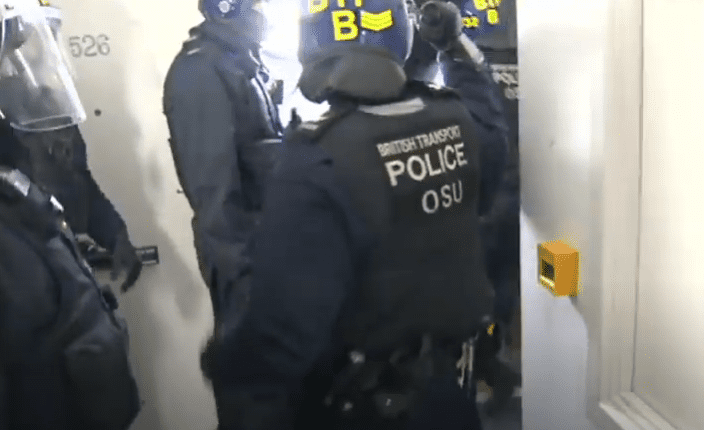 Image of the raid

Two people have been charged with modern slavery and class A drug offences after a dawn raid on a flat in Surrey Quays.

British Transport Police have linked the raid to the arrest of a thirteen-year-old boy in Rochester, who has been taken into police protection after being discovered with £1,500 of cash, several mobiles, and “markings of exploitation by County Lines gangs.”

Police entered the flat at around 6am last Friday where they arrested the man and woman and seized money, drugs and weapons.

Measures were taken to protect a third person who owned the flat as officers say they suspect he was also a victim of exploitation.

“Sadly, it’s not uncommon for County Lines gangs to use children, especially when they’re using them to transport drugs on the railway. In our work, we routinely come across children who are 15, 16 and 17-years-old,” Detective Superintendent Gareth Williams said.

“These gangs often use extreme intimidation and exploitative tactics, such as money and new clothes, to encourage these children to travel far distances to areas they don’t know with class A drugs, where they’ll be alone and at a high risk of harm.”

In the days before the raid, Kent Police secured the conviction of two people who were linked to County Lines in Kent and who police suspect to have a connection to the Rotherhithe flat.