The pair were "violent offenders" who were "menace to the London public," said the Met's DC Mark Cooper after sentencing 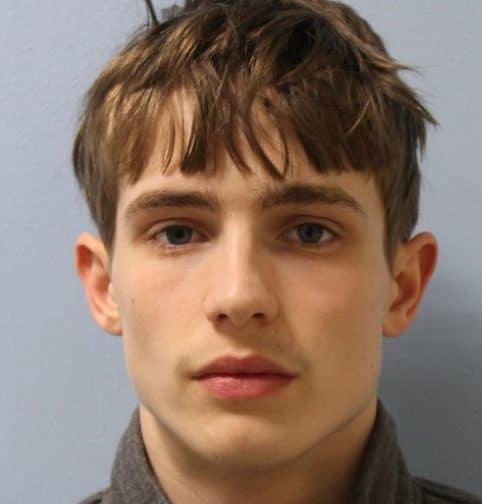 Frankie Batchelor (pictured) was sentenced to five years for his spate of crimes. His 16-year-old accomplice cannot be pictured (Image: Met Police)

Two Southwark teenagers, who carried out violent robberies, have been jailed for eight years in total.

Eighteen-year-old Frankie Batchelor, of Bermondsey, was sentenced to five years in a young offenders’ institution for a spate of offences, while a 16-year-old, of Walworth, was sentenced for three years.

The sixteen-year-old cannot be named for legal reasons. Both were sentenced at Inner London Crown Court on Monday, May 13.

Detective Constable Mark Cooper, of Operation Venice Investigation Team, said the pair were “violent offenders” who “were a menace to the London public.”

“In their brazen crime spree they used intimidation and violence to threaten, rob and steal from people going about their daily lives,” he said.

“They had a total disregard for their own safety and that of others.”

The court heard that on Saturday, August 4, Batchelor, riding pillion, and an unidentified accomplice who is still at large rode up to five people in a car on a stolen moped.

The court was told how the eighteen-year-old took an axe from his backpack, ‘which he swung at them, demanding their possessions.’

Some of the passengers fled from the ordeal, on Westminster’s Crawford Street at 3.30am, but police said ‘others were held captive inside until a watch and mobile were handed over’.

Batchelor then made a ‘deep gouge’ in the car, the court was told.

Police spotted the moped an hour later and chased it as it went on to jump red lights, reportedly taking bends at such a high speed that sparks flew from the vehicle. The moped collided with a marked police car – not involved in the high-speed chase – on Grosvenor Place, and the police car subsequently flipped onto its roof.

The court was told that it had been travelling in the opposite direction and tried to move out of its way. Batchelor was left on the floor with leg injury, while his unknown accomplice ran off. Police are still trying to identify and track down the moped driver.

The teen was taken to hospital and was later arrested for driving offences, having not yet been linked to the robbery.

Officers seized his backpack, containing the axe and stolen mobile phone. A stolen watch was also found in his jacket pocket. He remained in hospital for approximately a month.

The court was told that after leaving hospital in September, he was interviewed for the driving offences, but was released under investigation – before setting off on yet more crimes starting on January 3, this time the police said with the 16-year-old accomplice.

The court heard Batchelor drove a stolen moped to an estate agents on Gabriel Walk in Elephant and Castle.  The unnamed sixteen-year-old is said to have entered the front office with a hunting knife, stealing the mobile phones of three employees just after 4.52pm.

Only minutes later, the sixteen-year-old is said to have approached two men using laptops at a New Bridge Street café in the City of London, attempting to grab one of their computers.

He brandished the knife, and the other man handed over his laptop, before the teen fled the scene.

Officers said they managed to identify Batchelor, who had a limp from his injury, and his young accomplice from the CCTV in the estate agents the following day, on January 4.

But as officers rushed to arrest Batchelor and his pal at the 18-year-old’s Bermondsey address, the court was told how the pair were still carrying out a string of mobile phone robberies across Southwark.

Police said that shortly before 1pm, the moped-riding pair snatched a mobile phone as they drove on Tooley Street, Bermondsey.  Just over fifteen minutes later they tried again unsuccessfully on Valentine Place, in Blackfriars, before stealing another person’s phone on nearby Great Suffolk Street.

At 2pm, police said they saw the moped parked outside Batchelor’s home, and spotted Batchelor and his friend coming out to the vehicle.

The sixteen-year-old walked straight into officers, the court heard, while Batchelor attempted to hide in a doorway. Both were arrested for the January robberies.

A search of Batchelor’s home uncovered clothing matching that worn during the crimes and a hunting knife, the court was told.

He had pleaded guilty to all offences, except the moped snatches on January 4.

His accomplice, of Walworth, pleaded guilty to all of his offences, which were: two counts of robbery, two counts of theft, attempted robbery, attempted theft, breach of a Criminal Behaviour Order, and taking a motor vehicle without consent.

After sentencing police released CCTV footage, which includes the earlier robbery on the car and the incident where the police car flipped involving the unidentified suspect, who is still at large.

DC Mark Cooper said: “They had a total disregard for their own safety and that of others. They put people’s lives at risk by recklessly causing a collision with a police car that has left Batchelor with a permanent leg injury, but could have been something far worse for all concerned.

“Operation Venice will stop at nothing to bring to justice criminals who rob people, and will use every legal tactic at our disposal, including tactical contact to do so.”

Anyone with information should call local police on 101 or Crimestoppers anonymously on 0800 555 111.