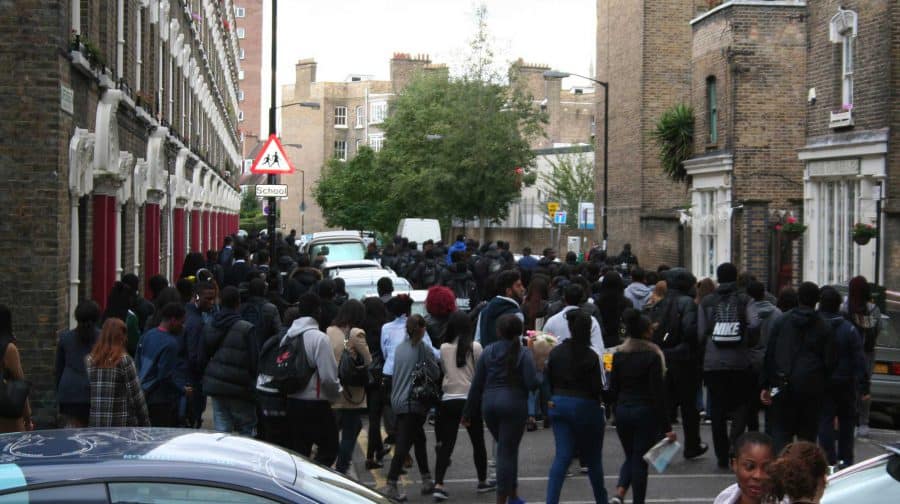 More than one hundred young people marched from the Aylesbury estate to the scene of where their young friend was killed, to pay their respects yesterday afternoon.

The mourners set off from the Wendover block, where sixteen-year-old Mohammed ‘Moe’ Dura-Ray used to live, just after 5pm and walked up to where the police had cordoned off the crime scene at Steedman Street.

The forensic tent marking the spot where the young Manchester United fan died from multiple stab wounds shortly before 11pm on Monday night could be seen a short distance away in Canterbury Place.

The crowd was a mixture of friends and family, with Moe’s fellow students from both Walworth and Globe academies in attendance.

One of the march organisers, Moe’s friend Femi Bademosi, was moved by the turnout. He told the News: “It’s to show support to Moe. This is beautiful.”

One of his former classmates said Moe’s death was a surprise to her because she thought he was “so strong” after he survived a previous stabbing
“Everyone loved him. Everyone is just shocked. Everyone who knew him is just here to pay their respects,” said another school friend. “I think this is beautiful.”

When the crowd reached Steedman Street they were told by the police that they could not lay their flowers at the crime scene as they had intended, because a fingertip search of the scene was still ongoing.

The 120-strong group walked peacefully around the perimeter of the Newington Estate and came to a stop under the railway bridge back at Steedman Street, where flowers were laid and candles were lit.
Prayers were said for Moe and his family as many mourners broke down into tears.

Moe’s head teacher at Globe Academy, Matt Jones, said the whole school had been “deeply saddened” to hear of his death and passed his thoughts and prayers on to the family.

MP and local resident Neil Coyle told the News he was concerned the incident could lead to a string of gang reprisal attacks and the loss of more young lives. “This is an awful tragedy for the family. I hope the Met’s Trident team will get on top of this quickly and make sure there are no reprisals.”

Mr Coyle, who usually walks through the estate twice a day on his way to and from work, said the alleged ‘ambush’ “didn’t come out of nowhere”, as youths were seen gathering on the estate from 7pm.
“I’m aware that there was a build-up of tension before the incident and I’m asking for reassurance from the police that they responded to any concerns raised by residents.”

Borough Commander, Chief Inspector Zander Gibson said he and his teams are determined to stamp out the “scourge” of knife crime and has recently advocated a rise in stop and searches.

On Tuesday he tweeted a plea to the borough when he said: “Please get behind us Southwark. We ALL need to be better at challenging the behaviour of young people carrying knives.”

Later he told the News: “It’s really important to me that we have the support of the community in our efforts so I would encourage anyone with information on Monday night’s incident to ring CrimeStoppers on 0800 555111 where information will be treated in confidence.”

Seven men between the ages of sixteen and 54 have been arrested and are being held in custody at different police stations.

When is this ever gonna bloody stop!!

Wow Moe!!? I never knew that we was actually saying goodbye to each another last week Wednesday. I don’t know why God took you away from me so soon?? now it is going to be very difficult for me to even stand or walk at our usual chilling spot because your spirit has consumed the atmosphere this makes it even harder for me cause it will bring flashbacks of the good moments we had. Words can’t describe how i feel right now, but all I can do/say right now R.I.P and I will always remember you in my prayers? hopefully we shall all meet again and maybe God will let the batch off!! So we could live them happy days again????? missing you already???.

shut up jason tay u hater he was a good person

You have no respect for the dead you burn in hell

Shallow minded asshole, do you have teenagers you’re trying to raise in inner-city? Your ignorance is embarrassing, yeah of course the behaviour is not okay have you ever thought there is a human being and environmental factors that may have led to this behaviour. Sorry, forgive me, but change your thinking be part of the solution not part of the hate committee you obviously have no idea what these young ones are up against

A young life has been lost, can’t take the negativity, be part of the fucking solution!!! I bet you are conservative … over-privileged pricks

Run, run, run all the time
See an advert and follow as society mime
Repeat and repeat
Win a race
Win a place
To the Detachment Olympics
Getting there is the simplest

Hey, i won second prize
in silent demise
Status unknown for those that had soundless deaths
No wasted tears crying they moved on in less than a breath
One lie, two lie, three lie, four
Six lie, seven lie what’s one more?

Talk, talk
Click click
power and politics makes us feel sick
Churning in my stomach, the latest abuse
I am talking about you, your backs firmly turned on our falling youth
One lie, two lie, three lie, four
Five lie, six lie what’s one mo?