UK FIRST: A completely free nursery to open in SE15 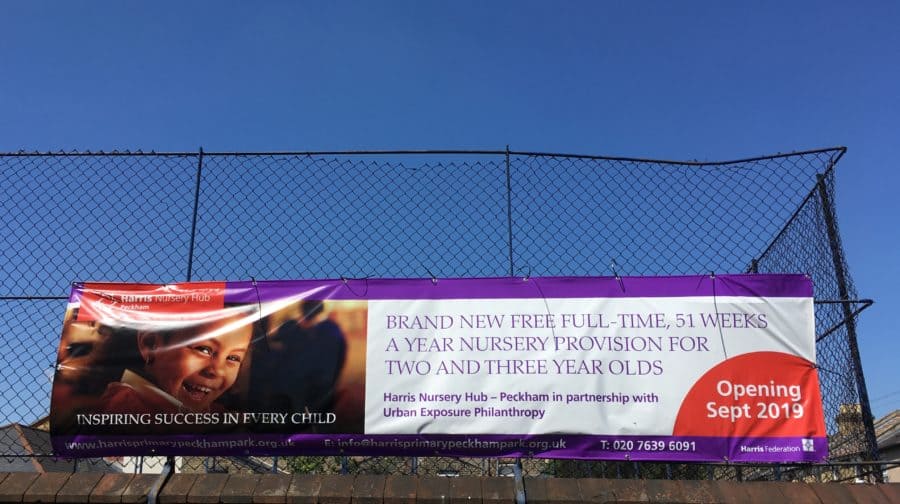 The country’s first completely free nursery will open in Peckham this September.

The Harris Nursery Hub, currently under construction at Marmont Road, will offer 55 free hours of childcare a week to children aged between two and four.

This is nearly double the amount currently offered to parents by the government.

A total of 32 places will be allocated to children where all parents in the household are working, seeking employment or studying full time with those who live closest given priority.

Sabeena Hasan, director of primary education at Harris Federation, said she was ‘thrilled’ to announce the news.

“As anyone with young children will recognise, the cost and availability of quality early years education can make it very difficult for parents to work or study,” she said.

Her thoughts were echoed by the federation’s chief executive, Sir Dan Moynihan, who described the prohibitive cost of childcare as an “outrageous failure of successive governments”. A pupil at Harris Academy Primary in Peckham

“This affects many families but hits mothers, young parents and single parents the hardest.

“Amongst wealthy parts of the EU, London has the largest employment gap between men and women of childbearing age, with women far less likely to be in work.

The nursery, based at Harris Primary Academy, is the first in a series the Harris Federation aims to open across London, with funding from Urban Exposure Philanthropy covering the costs of the free places – including three healthy, freshly made meals a day.

The nursery will include play-based learning facilities including a sensory room and outdoor play area.

Universal childcare has been described by Camberwell and Peckham MP Harriet Harman as “the missing part of our welfare state”.

Currently, parents of three and four year-old children are able to receive a maximum of thirty free hours a week – but the funding allocated is failing to keep up with rising costs.

It is believed that more than 1,000 SureStart centres, set up by Labour, have now closed across the country.