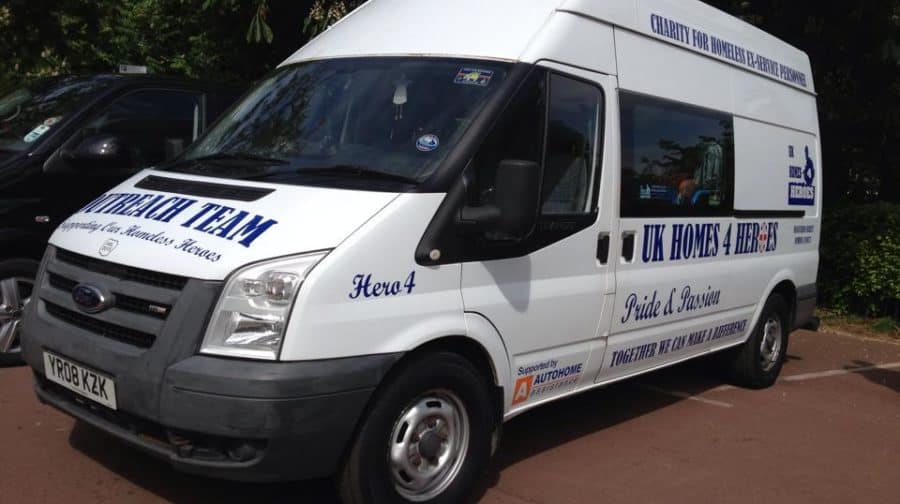 A Rotherhithe-based veterans’ charity has been forced to give up its outreach vehicle used to feed homeless ex-soldiers because of the Ultra-Low Emissions Zone, (ULEZ).

The UK Homes 4 Heroes’ vehicle, dubbed ‘Hero 4’, does not meet low-emissions standards required by ULEZ which comes into force on Monday, meaning the charity would be forced to  pay nearly £25 a day for their outreach work for homeless ex-squaddies in central London.

The charity’s founder, Jimmy Jukes, told the News: “We’re up the swanee without a paddle to be honest with you.

“We’re in-and-out of central London on a daily basis, we could be paying up to £150 a week.

“[ULEZ] It’s massive for us, really. Our boys are more important than emissions.” Jimmy Jukes pictured next to the vehicle alongside partner Michelle Thorpe

Instead of forking out the combined daily ULEZ and congestion charges, the charity has waved goodbye to the vehicle – but warns it might not be able to continue the outreach work in London unless it raises the money for a ULEZ-compliant car.

Now it has started a £15,000 GoFundMe page for a vehicle which does meet the emissions standards to carry on the outreach work.

“I feel a bit embarrassed, but we can’t afford to pay fifteen grand out of what little we’ve got,” said Mr Jukes who was awarded an MBE for his services to the homeless.

“People don’t raise money for us to get new vehicles, they raise it so we can help our boys and girls who fought for us.

“But we’re going to carry on doing what we do, feeding our homeless.” Around £400 has been raised towards a new vehicle so far. The crowd-funder was set up yesterday.

Mr Jukes – who is also a ‘Pearly King’ of Southwark – founded the charity in 2010, after his friend came back from serving in Iraq and was unable to find housing.

His friend, who he named as a rifleman called Matt, was involved in an explosion after his patrol car hit an IED in 2007.

When he left service in 2009, Matt found himself homeless for family reasons, said Jimmy.

“We clothe them, we help them get housing, we feed them. We’re not a charity that sits on its backside,” Mr Jukes added.

He estimates the charity has fed tens of thousands of homeless people since it was first started.

Cars which do not meet emissions standards face an average daily charge of £12.50, on top of the congestion charge, inside the ULEZ.

Some vehicles are exempt, but there is no specific exemption for vehicles used for charitable purposes.

Alex Williams, Director of City Planning at TfL, vowed to get in contact with UK Homes for Heroes to offer support, saying their work is “integral” to helping rough sleepers.

“We recognise that charities like UK Homes 4 Heroes are integral to helping rough sleepers across London and we will contact them to offer them further advice and support,” he said.

“Research shows that London’s dirty air disproportionately affects the most vulnerable and results in thousands of premature deaths every year.

“The Ultra Low Emission Zone is essential to help change that.

“We have worked alongside many charities to support their ULEZ preparations and to help them as they clean up their fleets.”

He added that the Mayor has introduced a £23million van scrappage scheme ahead of ULEZ coming into force to help organisations make the changes needed.

If you want to donate to the charity’s fundraiser for a new ULEZ-compliant vehicle, you can find it here.

This charge is a tax. If it wasn’t about raising revenue for TFL the mayor of London would have granted charities a concession so they can use their money to buy the correct vehicles.

People do not donate to charities for that money to line TFLs pocket.
Further , charities do not generate income. Businesses can pass the costs of fines / new vehicles onto the customer. Charities do not have this option. This lack of concession is wrong and grossly unfair