The new ULEZ zone comes into force today - and means a daily £12.50 charge if your vehicle does not meet low emissions standards 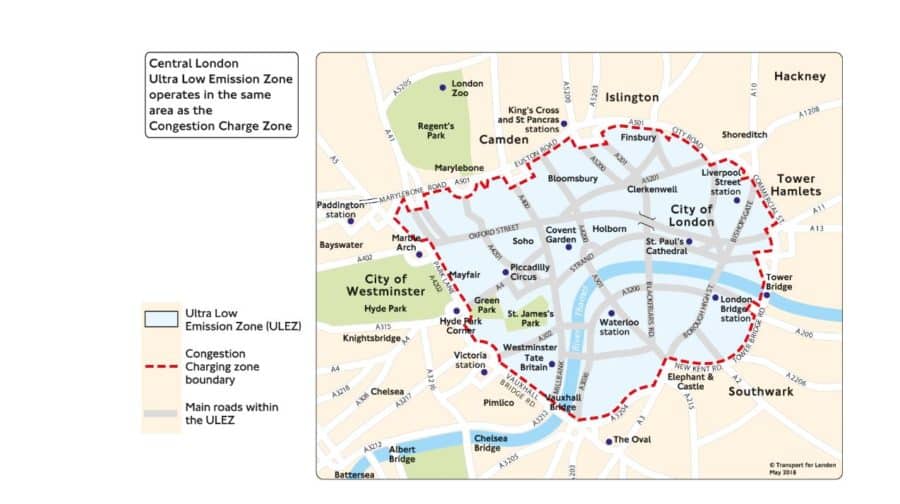 A TfL map showing the area that ULEZ covers

The Ultra Low Emissions Zone (ULEZ) has come into force from today, covering areas of Southwark.

The ULEZ zone means that anyone with a vehicle which does not meet new stringent low emissions standards will have to fork out a £12.50 charge – on top of the congestion charge.

Mayor Sadiq Khan has introduced a scrappage fund to help ease the transition, with £48million pledged to help small businesses and charities move to a ULEZ-compliant car.

Some have already been stung by the new strict rules.

As the News reported last week, UK Homes 4 Heroes, a charity feeding homeless veterans says it has been forced to scrap its outreach van over the ULEZ requirements.

TfL has said it will offer the charity additional support and advice to help manage the transition.

A report by King’s College London showed that almost 10,000 people die in the capital prematurely each year due to toxic air.

Pollution has also been shown to stunt children’s lung development, according to The British Lung Foundation. “If stringent action isn’t taken, we will continue to see air pollution contribute towards the stunting of children’s lung development and the premature death of almost 10,000 Londoners- mostly in the capital’s poorest communities.”

The zone is due to be extended by October 2021 to cover the area bounded by the north and south circular roads.

To apply for the scrappage fund online or check your vehicle’s compliance, visit tfl.gov.uk/modes/driving/ultra-low-emission-zone