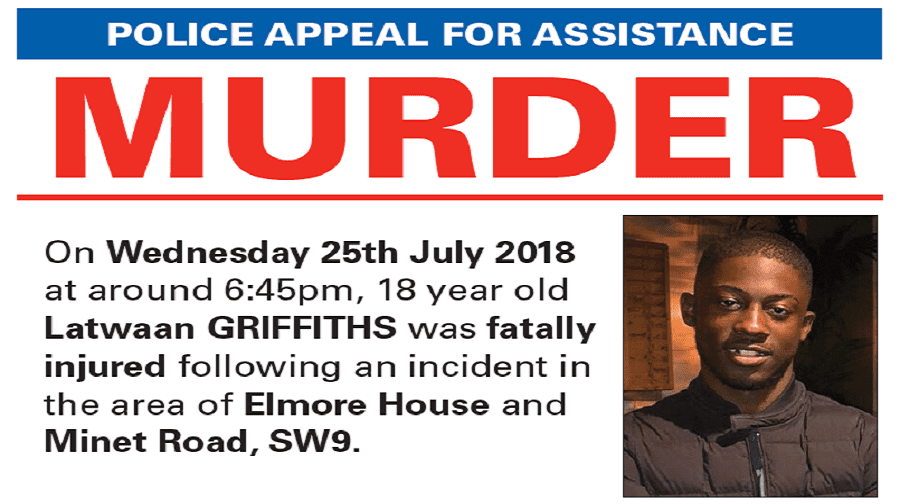 Police have released more information on the murder of Southwark teenager Latwaan Griffiths,  identifying the area they believed he was stabbed, before being taken on a moped and dumped on the street, writes Danny Wiser…

The eighteen-year-old was found with knife wounds in Camberwell at about 6.55pm on Wednesday, July 25, but is believed to have been killed in Loughbourough Junction.

Police identified the area in which Latwaan was killed as ‘the area of Elmore House and Minet Road’. In a statement released by police Latwaan’s family said they wanted peace, adding that until people come forward “there is nothing stopping you from being the next victim of a knife or gun crime”.

Detectives have released an image of a moped rider, who dumped Latwaan on Denmark Road, in the hope a member of the public may be able to identify them. Officers started to distribute leaflets around the area of Latwaan’s murder on Wednesday, August 1.

Knife crime has reached epidemic proportions across London and Camberwell in particular has been a hotspot over the last few weeks.

Latwaan’s murder in Camberwell came just under two weeks after seventeen-year-old Katrina Makunova was stabbed to death in nearby Brisbane Street on July 12.  And this week on Warham Street , Camberwell, the same day as the police were out leafleting, the area bore witness to a triple stabbing.

It resulted in yet another death – this time of 23-year-old  Saddique Kamara, known as Incognito and SK, who is believed to be part of the Moscow17 group. The other two victims aged sixteen and 31, were taken to a south London hospital with non-life-threatening injuries.

Officers have since arrested  two men, aged nineteen and eighteen, close to the scene on suspicion of murder.

As the search continues for Latwaan’s killer, the teenager’s family pleaded: “We want to put Latwaan to rest, but we cannot do that unless you help us with this murder inquiry”. Leaflet distributed about the 18-year-old’s murder