Six other people had been able to escape from the building before firefighters arrived. 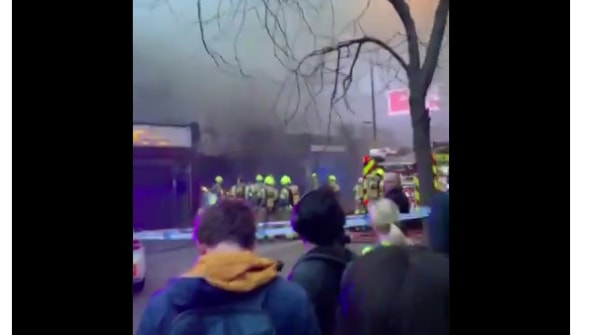 Two people were dramatically rescued from a burning building on Walworth Road this morning.

London Fire Brigade said firefighters wore breathing apparatus as they scaled a ladder to help a man and woman from a first floor flat.

The woman was treated at the scene for smoke inhalation before being taken to hospital by paramedics.

Six other people had been able to escape from the building before firefighters arrived.

Ten fire engines and around 70 firefighters were at Walworth Road to tackle the blaze at a shop with flats above.

Station Manager Pete Cox, who was at the scene, said: “When crews arrived they were faced with a lot of thick, black smoke.

“Firefighters worked hard to bring the fire under control.”

Building is on fire on Walworth Road. Road closed, emergency services all over it. pic.twitter.com/NDF8UQVPZ8

The ground floor has been destroyed by the blaze, with the basement, first floor and second floor also damaged.

The Brigade was called at 7.42am and had the fire under control by 9.45 but crews have stayed in place damping down the building.

The London Ambulance Service said it was called at 7.50am to reports of a fire on Walworth Road, Walworth.

“We sent an ambulance crew, an incident response officer and our hazardous area response team (HART) to the scene,” a spokesperson said.

“We treated two people at the scene and took one of the two to hospital.”

The Met confirmed officers remained at the scene.

A215 Walworth Road at the junction of Browning Street – The road is currently closed due to a building fire. Please use an alternative route.