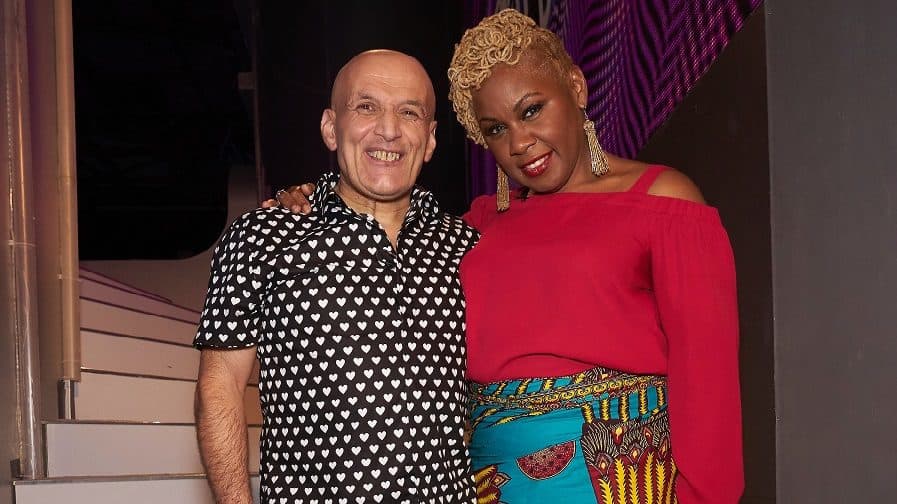 George and Valletta on their way to Fernando's

It was (almost) love at first light for Sydenham lady Valletta, who was whisked away to Fernando’s after appearing on an over-50s special of Take Me Out on Saturday.

Last week Valletta told the News: “We’re over 50 but we aren’t dead yet. We’re still here, and we can still have fun like the youngsters.”

The 57-year-old social work student said “It wasn’t really nerve-wracking, since we were so busy having fun,” and that she was still in touch with some of the other ladies who took part.

As the ladies find out more about the gentleman, they either keep their light on to show they’re still interested, or turn it off if it’s not ‘love at first light’.

At the end, the hunk has to pick who to take on a date – on the romantic isle of Fernando’s.

This week’s episode for the over 50s kicked off with eligible bachelor and Zumba instructor George Martini joining Paddy on stage.

When Paddy asked the ladies “Girls are you turned on or turned off?”, the answer was a resounding yes – as all 30 kept their lights on.

Susan loved his big smile and chubby cheeks – and nabbed herself a kiss while giving them a squeeze, but it was gorgeous Valletta who left him shaken and stirred.

The proud Italian dad from Oxford used to work in the ‘rag trade’ and once had his own store, but it was his dance skills that won over Valletta.

When Paddy asked Valletta she’d left her light on she gave a one word answer – “hips!”

The deciding question came when George asked the remaining ladies: “If you had an empty swimming pool, what would you fill with it?”

George said marshmallows, and Valletta replied: “You put the chocolate in and I’ll do the backstroke in it.”

In Fernando, Valletta said after being single for nearly thirty years she was ‘looking forward to something happening’ – with a cheeky laugh, while George said he ‘wanted to show her more of his moves’.

It turned out that Valletta had indeed been his ‘love at first light’ – the lady he told Paddy was his favourite from the outset.

And although Valletta admitted she’d initially only left her light on accidentally, she was won over by George and his quest to find someone ‘young at heart and full of life’.

And the News is pleased to report, the pair have agreed to go on a second date.

Congratulations Valletta – you deserve it!