Hogarth’s work stands out from the European crowd in conviction, insight and delivery 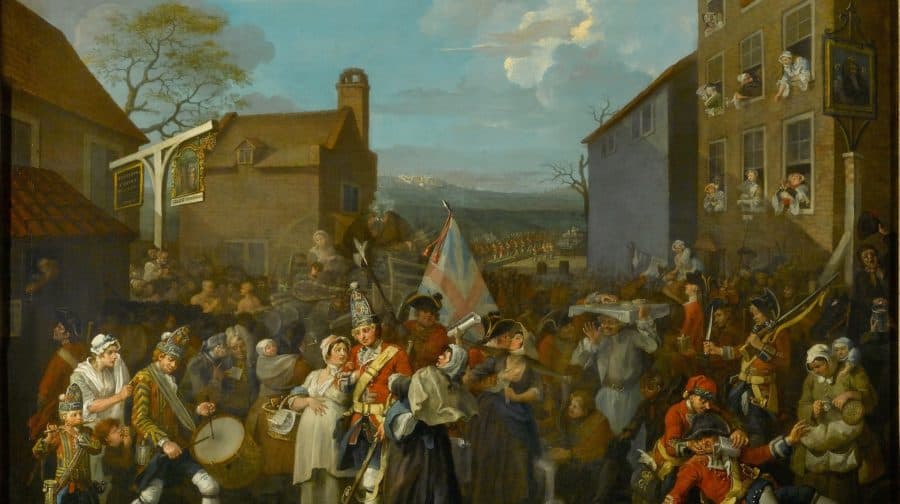 The March of the Guards to Finchley 1750 The Foundling Museum

Breaking news! It’s all going down at Southwark Fair in the Borough, fisticuffs with the law, prowling  pimps, con artists, thieves, boxers, unruly actors, dogs in clothes and a huge collapsing stage is just about to crush a crockery stall. The pottery in the stall is Southwark-made delftware, South London’s own knockoff Dutch pottery. A monkey clings to the falling wreckage before the clock tower of our very own St George’s church. This could only be the world of 18th Century painter William Hogarth and to paraphrase Chicken Licken, the sky is falling, the ground is shifting and a ticket to see this spectacle at Tate Britain’s new exhibition Hogarth in Europe is money very well spent, writes Ed Gray.

Rollup then! Let your eyes adjust to the clouds of dust we know will follow this carnage. Scan the crowd and look again, for the real genius of Hogarth is that this is our world as much as his. Hogarth was the first painter of the modern age of mass production and consumption and the rural exodus to the city. We are attending the birth of our own age then and Hogarth delivers a vision of it that puts ordinary people centre stage – victors and victims – as he elbows past the traditional art patrons of church, monarchy, aristocracy with sharp elbows and even sharper wits.

If you were to ask a patriotic native who they might want to feature on the next banknote (while we still proudly trouser such markers of cultural identity) then Hogarth’s name might well top the list as an emblem of Englishness. Look more closely at the March of the Guards to Finchley (1750), loaned from the Foundling Museum, a charity once assisted by Hogarth as a refuge for the children of women abandoned to poverty by their menfolk. Only Hogarth would dare to present such a turbulent vision of patriotism crammed with unruly drunken guards preferring to linger lustily outside a Tottenham Court Road brothel rather than confront rebellious Jacobites. You might even picture one of them urinating against a war memorial years later.

Hogarth’s story is really London’s story. An ordinary man born of humble origins in Smithfield, his father introduced young William to the claustrophobia of Marshalsea debtor’s prison after a bad investment in a coffee shop, which carried the stipulation that patrons could only converse in Latin. Talented young Hogarth learnt from this example, becoming an engraver and climbing the social ladder to marry Jane, daughter of Sir James Thornhill, painter of the impressive Baroque painted mural at the Old Royal Naval College Greenwich.

Curators Alice Insley and Martin Myrone have created a timely exhibition for Tate Britain, one which comes at a time of great national introspection, debate and insurrection – our nation’s eyes downcast in expectation of the prize of sovereignty and self-rule, freed at last from our meddling European neighbours. By aligning his work with expertly chosen paintings from Hogarth’s European contemporaries such as Jean Simeon Chardin, Etienne Jeurat, Giuseppi Cresci and Cornelius Troost, Hogarth And Europe reveals that this most English of painters owed a great debt to European art and culture, and vice versa. We see common threads weaving between the narratives of all of these 18th Century artists.

Art is borderless and the collective varied responses of each artist to their own changing societies is a joy to see as they step up to the challenge of filling empty walls in the homes of the new merchant classes with wit and warmth, inspired by each other’s visions. Artist-entrepreneur Hogarth revelled in the opportunities of his age, creating his own tag line – modern moral subjects – working sequentially and layering each painting with visual gags, recognisable characterisation, lampoonery and a swift ,sobering shot of sharp, social criticism designed to appeal to the vanities of the middle classes. He used mass production to build his name, creating editions of prints for direct sale with the result that he became an adjective – Hogarthian. For these reasons Hogarth’s work stands out from the European crowd in conviction, insight and delivery. But then, I only have a British passport.

Another striking characteristic of Hogarth, the man, was his intention to reform the world around him. Along with Rotherhithe resident the sea fairing Captain Thomas Coram, he used his stature to benefit the Foundling Hospital by establishing the first public art gallery and creating the 1732 Act of Parliament that protected artists from breaches of copyright. But it wasn’t all plain sailing. Throughout the Tate’s exhibition, guest commentators spell out the paradoxes of Hogarth’s work and the dark side of trade expansion and mass consumption in 18th century Europe. Hogarth’s brilliantly satirical Midnight Modern Conversation (1733) – think Bullingdon club with wigs askew – sees the gathering guzzlers chug rum from a china punchbowl made from cane cut by enslaved people in the Jamaican plantations. It’s a wonderful example of the power of Hogarth’s art to see an actual 18th C punchbowl decorated with this scene, a great example of early merchandise too. Charitable tax avoidance? Hogarth satirises it brilliantly with a mammoth boozing contest in Charity in the Cellar (1731). But the hangover kicks hard with the bitter taste of bile in Taste in High Life (1746), which depicts a small African boy in a metal collar being stroked by a merchant lady. A small pearl earring adorns his ear. He will be of use until he is no longer required and then returned to the plantations. Similarly Viscount Squanderfield clutches a syphilitic child prostitute in Marriage a La Mode (1745). These are the by-products of unregulated mass consumption, capitalism’s ultimate purchase – the human soul.

It’s worth noting that the owner of Hogarth’s Harlot’s Progress and Rake’s Progress died in 1770 owning 1356 enslaved people. This was the artist’s market, such were his patrons, and just as London and the nation benefited from the trade in African people, so did Hogarth. Somewhere along the way that knowledge was buried and ‘woke’ criticism levelled at this show needs to be put in perspective. Looking around galleries of largely white faces it’s impossible to see how Tate Britain – a sugar merchant’s creation by the banks of a river that brought global trade, and slaves, to the city – could have framed this show any differently.

The Thames holds its secrets, the filth that Londoners flush away, until low tide uncovers them all. Mudlarking on the Southwark foreshore among the unabating plastic detritus of our own age of mass consumption your eye might be drawn past tiny fragments of Roman pots, old tannery leather and broken clay pipes to a small shard of blue and white pottery. It might remind you of the doomed Delftware pottery stall in Hogarth’s Southwark Fair and how a generation of artists with a shared creative vision attempted to smash an old hierarchical world to expose the moral conflicts of their age. In the process they left us the paintings in this exhibition, glinting fragments of real life that reveal the cracks in our own misplaced vanity. Tell everyone you know about this show, before the sky falls in.