'In the 1970s, people would come in for a cut, wash and blow mullet before switching to an ‘80s perm like Kevin Keegan' 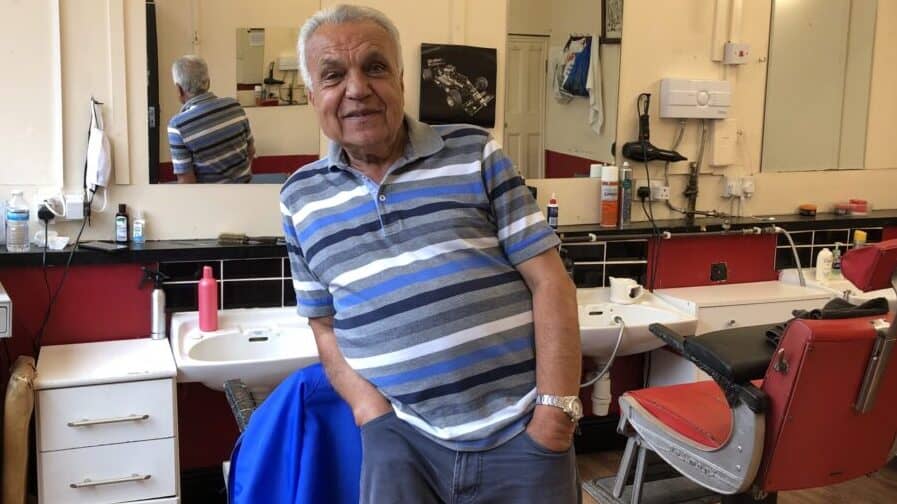 Andrew inside the barber shop

A barber who has kept Peckham looking sharp for 55 years is finally hanging up his scissors, writes Simon Throssell…

Sotiris Andreou, 74, locally known as ‘Andrew’, has been trimming, cutting and shaving heads on Atwell Road, just off Rye Lane, since 1965.

He has now announced his retirement at the end of August – but not before saying goodbye and thank you to his loyal customers.

“I want to say a big thank you to all my customers, friends and family,” he told the News, before reflecting on his time in SE15.

After training in Cyprus, he moved to south-east London as a nineteen-year-old and joined the team run by father-son duo Chris and Steve Georgiou; the latter later becoming his brother-in-law. The trio were once nicknamed the ‘Three Amigos from Cyprus’, with a shared upbringing and trademark shop banter.

In 2016, Steve followed his father, who had retired earlier and handed ownership of the shop over to Andrew, who has been shearing locks solo since.

The secret to his longevity has been friendliness and respect, he told the News, explaining that he has always relied on word-of-mouth recommendations.

“My job is to make my customers feel comfortable and forget about what’s on their mind.

“If we show respect and they show it back, this is what brings people back.”

In the past five decades, Andrew has cut the hair of generations of families and seen how Peckham and its hair styles have changed.

“In the 1970s, people would come in for a cut, wash and blow mullet before switching to an ‘80s perm like Kevin Keegan,” he remembers.

“As new fashions transformed the 1990s and 2000s, so has Peckham, and it’s become a fantastic, multicultural place.”

He can’t even begin to count the number of people he has had through the door and has even encountered some famous faces along the way.

“We’ve had all sorts of characters come into the shop, from police officers and MPs to Neil Arthur [of the synth-pop band Blancmange].

“But my all-time favourite has got to be [former SAS officer] Andy McNab.

“I was showing one customer my collection of Andy’s books and he turned out to be a film producer working on a documentary about him.

“They brought him down to the shop and included a scene of his haircut in the final film.” However after almost 55 years since his first day on 27 December 1965, he has decided it’s time to say goodbye.

Due to Covid-19 and the impact this has had on barber shops as well as his 75th birthday approaching, Andrew is looking forward to enjoying time to do some home gardening and to visiting his daughter and granddaughter back in Cyprus.

“I have received some lovely messages from people thanking me for all of this time.

“It is sad to say goodbye but I want to say a big thank you to all my customers, friends and particularly to my adopted family, Chris and Steve Georgiou, for the memories and experiences.”

He is planning to hold an informal celebration on the final day of the barber shop on Saturday, August 29, and will welcome people in for a haircut and a toast to the future.