VIDEO: Battersea dog too scared to leave his kennel gets a ‘support pug’

'Although Pancake and Fraser didn’t appear to be the most likely pairing, it was heart-warming to see how well they got along' 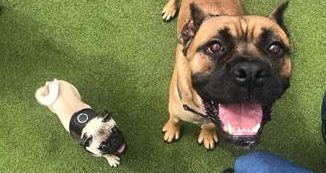 A dog so scared when he went to Battersea that he struggled to leave his kennel has grown in confidence thanks to being befriended by a pug less than half his size.

Fraser may look a bit intimidating, but he is actually a big softie who found adjusting to life at Battersea really difficult, refusing to leave his own kennel even for a short walk.

The Cane Corso has docked ears and tail, adding to his slightly scary appearance.

Unnecessary tail and ear docking is illegal in the UK and thought caught performing the procedure can face animal cruelty charges.

But fearful Fraser’s attitude has completely changed since befriending a tiny, six-month-old pug called Pancake, who was adopted by one of Battersea’s canine behaviourists.

After trying everything to build Fraser’s confidence, the team decided to see whether introducing Fraser to a more confident dog would help him to follow their lead.

Pancake’s owner, Elizabeth Kidd, said: “Although Pancake and Fraser didn’t appear to be the most likely pairing, it was heart-warming to see how well they got along.

“Little Pancake really taught Fraser how to be a brave dog and be more confident in himself.

“Fraser really thrived in his friendship with Pancake; helping him to come out of his shell.”

“Some nervous dogs in a kennel environment may find a friend beneficial.

“Where appropriate we pair less confident dogs up with those who are more resilient and cope well with new environments, like our kennels.

“Alongside other tailored behavioural and training support this can be an additional way to help them feel comfortable whilst with us.”

If you think you can give Fraser a home, visit www.battersea.org.uk

Southwark NewsNewsVIDEO: Battersea dog too scared to leave his kennel gets a ‘support pug’