The baby seal may look like a toy but is a carefully designed to help dementia patients to socialise and stay calm. 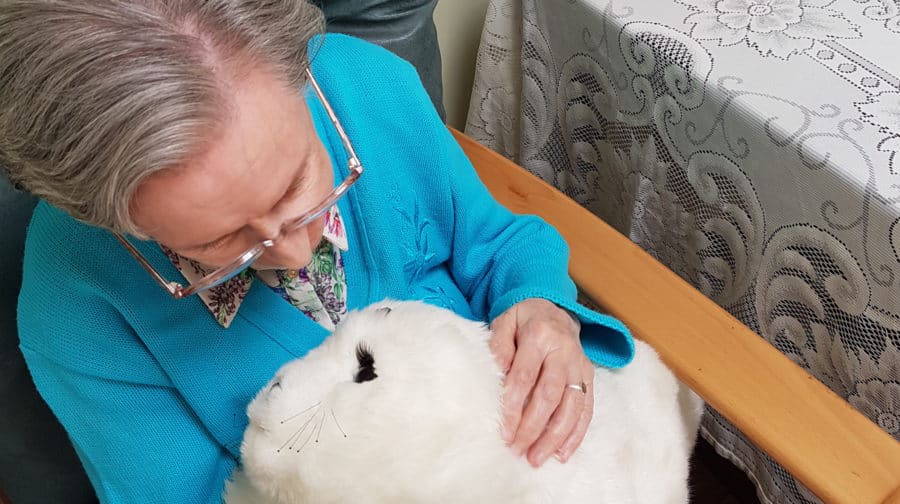 A robotic seal at a day care centre in Southwark is still helping the elderly come together after three years, writes Josh Mellor…

Age UK’s Stones End Day Centre in Scovell Road, Borough,  first acquired PARO in 2016 and since then it has been part of the family.

Deputy day centre manager Beatriz Beltran said: “It’s been really good for us, especially people with dementia but also people who don’t, it really calms them down and gives comfort to members or people who are finding it hard to enjoy the centre.

“I think it helps them to relax and they call it their baby.

“They start talking to people around it and getting on with each other, people are lonely, it is the biggest issue in the borough for those at these ages.”

PARO has two main roles at the centre, to bring together members who are becoming less social, and to sooth dementia sufferers who can become agitated, aggressive or confused in the afternoon, in what is known as ‘sundowning’. Centre manager Brenda Wade explained why the dementia crisis has driven carers to look for innovative solutions: “There’s no answer, people are getting dementia and they still haven’t got a clue why people get dementia.

“There’s no cultural or dietary thing, people really don’t know and so the number is just escalating out of proportion. There’s an epidemic now, medicine certainly isn’t doing it so we’re resorting to futuristic devices.

“Certain parts of him is sensitive to touch, he can move his tail, blink his eye, move his fin, respond to your voice.

“I like stroking him, it’s quite relaxing, because the fur is nice and soft.”

Although animals are an effective therapy tool that centres for the elderly occasionally use, PARO’s advantage is that it does not trigger any allergies. Since it is a baby seal it is much less likely to bother those who have phobias of dogs or cats and is able to recognise voices, responds positively to touch, it will also be quiet if it senses anger or nervousness. Inventor of PARO, research professor at Tokyo Institute of Technology Takanori Shibata, Ph.D. said: “I hope more and more PAROs are introduced to the UK, and they contribute to improve quality of life of elderly and others such as patients with anxiety, pain, depression or behavioural issues.”